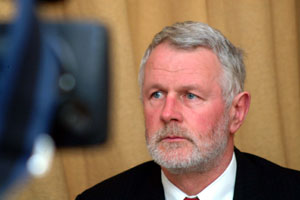 As Irish consumers get ready for a 34% increase in gas prices and a New Year 20% hike in ESB bills its clear the country has an energy crisis.

Last Sunday, an array of government ministers including the Taoiseach, presented a 112-page Green Paper on A Sustainable Energy Future for Ireland filled with a lot of aspirations but few figures on solving the energy problems we face because of years of piecemeal flawed initiatives and the lack of a vision to develop our existing natural oil and gas resources or tap the full potential of renewable resources through wind, wave and other technologies.

The 26 Counties has the second highest electricity prices in Europe and with 66% of energy coming from oil and gas and this is set to continue for the foreseeable future. So what was the core of the Fianna Fail Green Paper? There are three pillars to the government policy - security of supply, environmental sustainability and competitiveness.

In terms of energy security there are serious challenges, 80% of the natural gas used in the 26 Counties is imported from Britain, and 56% of all energy demand including transport comes from oil.

The Green Paper tells us that "the Government's commitment to offshore exploration is critical", but there is nothing on how to ensure that the economy will benefit from any new exploration. Sinn Fein has consistently called for a revision of the oil and gas exploration terms, but it is not dealt with in this paper.

Corrib is mentioned but there is no reference to the giveaway of oil and gas resources that yields no tax revenue to the state or the fact that Irish households and businesses will have to pay top price for any gas pumped ashore. With exploration of the Slyne, Donegal and Erris basins in coming years it seems we will be repeating the failures of the Corrib giveaway.

The government does raise its target for energy from renewable sources to 30% by 2020, doubling the 15% target for 2010, and there is repeated support in the paper for the development of an all Ireland energy market.

The greatest flaw in the Green Paper is in the accompanying review by Deloitte of the ESB that rejects the mass privatisation of the public sector firm and in particular recommends that ESB networks remain in state control. If this logic was extended on all-island basis we could have a publicly owned power network for the island. However the government Green Paper talks only of private sector development of offshore oil and gas reserves and private sector driven developments in the renewable energy sector so at a basic level they are ignoring the positive contribution the state can make to not only securing energy supplies but developing renewable energy resources also.

The irony of the green paper launch was that it coincided with a 34% increase in gas prices for domestic consumers which will be levied for a year despite the recent fall in international oil prices. The price hike means that gas prices have risen by over 50% in the last two years.

Sinn Féin's Martin Ferris attacked the decision to go ahead with the price rise. Ferris said that "the international situation had changed recently" and that the "massive hike is not only disproportionate but will have a detrimental impact on the living standards of many low income households".