Ahern controversy - Recent events should not distract from bigger issues 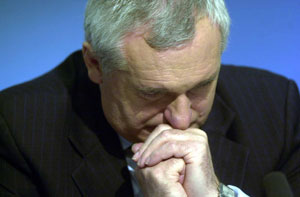 Government should go - the sooner the better

Following a week of political controversy, Taoiseach Bertie Ahern apologised to the Dáil on Tuesday afternoon for what he said was a misjudgement in accepting money from friends and a group of Manchester-based businessmen in the 1990s.

However, Ahern said he was not in breach of any law or code of conduct at the time. But he said he now regretted the choices he made.

Recalling the Manchester Payment of 1994, he said the IR£8,000 was given in the context of his family difficulties, and there was no quid pro quo.

Ahern says that he can only recall with certainty three of the 25 people who were in Manchester at the event where he got IR £8,000, They were: John Kennedy, Tim Kilroe and Senator Tony Kett. Ahern said again this function was in his capacity as an individual and not as a minister.

Sinn Féin's Caoimhghín Ó Caoláin TD told the Dáil during statements on the issue that the Fianna Fáil/Progressive Democrat coalition Government should go, 'the sooner the better'. Saying the Taoiseach was 'clearly wrong to accept the personal donation' in Manchester and that the people deserved an explanation, Ó Caoláin nevertheless warned against letting the 'events of the last week...distract us from this Government's long-standing political bankruptcy, and that is something that no whip-round will be able to remedy'.

The Cavan-Monaghan TD said that Bertie Ahern was clearly wrong to accept a personal donation during an event in Manchester when he was the 26 County Minister for Finance.

Ó Caoláin said that most people believed that Ahern was not personally corrupt, unlike many within his party at the time. However, he added that only the most naïve believed that he was not aware of what went on in the "brown envelope and blank cheque culture of the Fianna Fáil leadership and among many of its elected members". He said that such activity was not confined to Fianna Fáil and that Fine Gael, as shown by the Tribunals, shared a similar culture.

Ó Caoláin continued: "There is no suggestion that members of the current Fianna Fáil/PD cabinet have personally benefited from bribes or backhanders during their term of office. But there's an old saying about the British journalist that could be adapted to this Government:

'You cannot hope to bribe or twist, thank God, the British journalist

But seeing what the man will do, unbribed, there's no occasion to.'

"During this Government's term of office property speculators and developers have benefited directly as never before from Government decisions. The Fianna Fáil tent at the Galway Races has become a symbol of power, greed and elitism in Ireland the way Dublin Castle and the Kildare Street Club once were. The gulf of inequality in our society has widened - something that the new Tánaiste, the self-styled moral guardian of the Government, thinks is a good thing.

"If it was wrong for the then Minister for Finance to accept money gifts from wealthy business people in 1994 isn't it even more wrong for a Taoiseach and a Government, for the past decade, to surrender the housing policy of the State to speculators and unscrupulous developers who are fleecing families with the ever spiralling cost of houses.

"These are the same developers who successfully lobbied the Government to amend Part V of the Planning and Development Act so that they would not have to meet their legal obligation to provide 20% social and affordable housing in all developments. This Government has brought in a form of legalised bribery - because it has allowed the developers to pay off the local authorities. What other lobby group could have turned around a key piece of legislation in the same way?

"That is just one of the many reasons why this Taoiseach, this Tánaiste and the rest of this Cabinet should be thrown out of Government. These are far bigger issues than the current controversy. If the Manchester payment was, in the words of the Irish Independent, morally wrong, are decisions which adversely affect the lives of hundreds of thousands of people not also morally wrong? Are they not also deserving of media attention and commentary?

"What about the massive tax breaks and the allocation of land at public hospital sites for the developers of private for-profit hospitals? This is in the context of a grossly inequitable health service where instead of the promised 3,000 beds, we have had a thousand trolley usages in the last five days.

"I might add that there are no marches on the street about the current controversy but people are taking to the streets demanding their healthcare rights as we saw recently in Monaghan and as we will see again on Saturday 21 October when we in Sinn Féin hold a healthcare rally in Dublin.

"In the last number of weeks we have seen the announcement of almost fourteen hundred job losses across this state in Limerick, Carlow, Cork, Waterford, Inchicore in Dublin and in my own home county of Monaghan. It is unlikely however, that many of them will have circles of wealthy friends ready to help them out in such a time of financial crisis.

"Today at Bellanaboy in Mayo, we saw another example of the natural consequences of the connection between Fianna Fáil and big business. Early this morning Gardaí were outsourced to Shell Oil to serve as their enforcers against local people who have maintained a round the clock vigil at the site in protest at attempts to force a dangerous and unsafe pipeline through their community.

"This morning two of them were injured while being dragged off the road at the behest of Shell. The people of Mayo stood up to evictions by rack-renting landlords during the Land War. They will stand up to Shell Oil as well. And what about the role of former Minister Ray Burke in the negotiation of the terms for oil and gas exploration, the most generous in the world to giant multinationals?

"Let there be no mistake about it, the people deserve an explanation from the Taoiseach about this series of payments, loans and gifts from wealthy businessmen. But the events of the last week should not distract us from this Government's long-standing political bankruptcy, and that is something that no whip-round will be able to remedy.

"All of these are valid reasons for the entire Fianna Fáil/PD Government to resign and for a General Election to be called. And the sooner the better."

On Wednesday, Ó Caoláin TD accused the PDs of being willing to ignore Ahern's actions so they could pursue their right-wing agenda. He said 'The Irish people will soon have an opportunity to sit in judgement over this Government. And I believe their long overdue judgement will be harsh.'