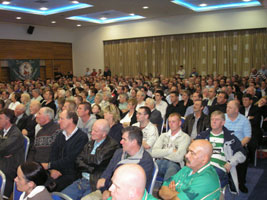 Speaking during a rally in Letterkenny, County Donegal last Sunday, 1 October, to commemorate the 1981 Hunger Strike, Sinn Féin President Gerry Adams said republicans remained focused on building a nationwide movement for change not only to end partition but for social justice and equality across the island of Ireland. The big challenge in the short term, according to Adams, was to get the political institutions of the Good Friday Agreement back in place.

He said that while most people are justifiably sceptical about the DUP's intentions, no-one should be in any doubt about the limits to the DUP's options in the time ahead.

"Of course, Ian Paisley may decide not to participate in the power sharing government but what does that achieve in the longer term for his party or their constituents?

"It condemns them to living in a second-class society with second-class public services undermined by punitive fiscal policies administered by unaccountable British Ministers.

"Not only is that counterproductive but it will have no long term effect on Sinn Féin's efforts to develop our vision for the future. So the DUP's approach is limited to delaying tactics that may give the fundamentalists some respite in the short term but it will not stop the process of change" Adams said.

He continued: "That process will continue including on an all-Ireland basis and across a myriad of cross-border measures and agreed partnership arrangements. If and when unionism decides to come back to the negotiating table in the future the progress that will have been made in those areas cannot and will not be undone or wished away.

Meanwhile a campaign co-ordinating committee to organise mass mobilisation in support of the restoration of the political institutions of the Good Friday Agreement has been formed by Sinn Féin. The committee involves the nine-county Ulster Cúige officer board aswell as party MPs, MLAs, Councillors, the Belfast Press office and members of the Belfast Sinn Féin Campaigns Committee.

Comprising 20 people the committee itself has been meeting on a weekly basis for the last three weeks to discuss the logistics and political thrust of the campaign. Posters, placards and other promotional material have been organised and Sinn Féin will distribute these over coming weeks in the various constituencies within the Cúige area.

A key political theme of the campaign is that ordinary people in the Six counties simply cannot afford continued British direct rule. Health cuts, education cuts, water rates and a stagnant economy continue to be imposed on people by British Direct Rule ministers must be put under the control of the people. The restoration of the institutions is the only why this can be achieved.

In addition a number of key public rallies have been planned. On Tuesday 10 October Sinn Féin President Gerry Adams MP will address a rally at Belfast's Europa hotel. Aswell as Sinn Féin elected representatives from the Six Counties, party figures and elected representatives from the 26 Counties will attend and address the gathering. The Europa rally takes place on the eve of talks involving all of the political parties in the Six Counties, and the Irish and British Governments in Scotland.

Another rally will be held in Glasgow on 16 October. Sinn Féin MP Pat Doherty will address a rally in Glasgow organised by Cháirde na hÉireann.

Sinn Féin also intends to engage in a process of outreach to groups and individuals in the community who are effected or who are trying to deal with the consequences of the cost of British direct rule. These will include community groups, teachers, business people and healthcare professionals.

In this context the campaign hopes to have a strong presence at the Sinn Féin organised health rally in Dublin on the 21 October.