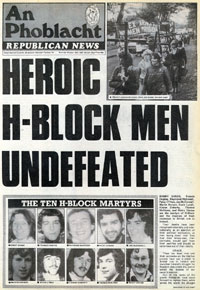 The statement went on to welcome the introduction of own clothing for all prisoners, calling it "a move in the right direction." But on the other hand they felt that Prior's attitude to lost remission was "very vengeful" towards them and their families. "Fifty per cent return of lost remission is inadequate. It means that in most cases prisoners will have to serve between two and two-and-a-half years extra in jail. In the present circumstances and atmosphere it represents a major problem. We hope that petty vindictiveness and bureaucracy are not going to be the cause of further confrontation in this dispute."

Just how central a political issue the seven-month Hunger Strike was in both Ireland and Britain was shown by the front page prominence given in most Sunday newspapers to the ending of the Hunger Strike, followed on Monday by a stream of editorials and lengthy feature pieces on the subject. Am

This week, 25 years ago, the epic and heroic chapter in Irish history that was the 1981 H-Block Hunger Strike came to an end after 217 tortuous days. The momentum of the Hunger Strike had been slowed down by a sequence of events, continuing when Hunger Strikers Bernard Fox and Liam McCloskey reluctantly ended their fast in the last week in September. This occurred at a stage when the protest had been building up again, after Matt Devlin and Laurence McKeown were taken off the fast by relatives at the beginning of the month.

On 25 September, after 33 days, Bernard Fox was told he had no more than four or five days to live. He was found to have been suffering from an obstruction in a tube leading to his kidneys. Following a meeting between the Hunger Strikers and the O/C of the republican prisoners, Fox agreed to end his fast and accepted medical attention in order to prevent ongst the various analyses carried in the papers were comments in The Belfast Telegraph - "Proceed with care" - and the News Letter, which stated "Real fight goes on." Curiously muted on the question of a British victory, and mindful of the unimpaired republican capacity for waging war against British occupation, their editorials were a tacit acknowledgement that Britain's victory was entirely illusory. Isolated internationally for its intransigence, its Irish policies in tatters, the blanketmen unbowed and republicanism strengthened, the British could only revel idly in the mere appearance of victory. Real victory had eluded them.

As a result of Britain's H-Block death policy and the bravery of the Hunger Strikers, massive political capital accrued to the IRA while British rule in Ireland was significantly destabilised. As Bobby Sands wrote in his prison diary on his first day on Hunger Strike: "I am dying not just to attempt to end this premature death through kidney failure.

Liam McCloskey reluctantly ended his fast on Saturday, 26 September after his mother convinced him that she would intervene once he lapsed into a coma. In a statement issued at the time she said that she and her family fully supported the prisoners' five demands, adding: "We don't want our son nor his friends to live in the conditions that created this Hunger Strike."

Earlier that afternoon, the protesting prisoners in the H-Blocks of Long Kesh had issued a statement through the Belfast Republican Press Centre sharply condemning the "Hunger Strike-breaking" tactics of Catholic priest Fr Denis Faul, whom they accused of deliberately maximising pressure on the families and especially mothers to go against their sons' expressed wishes.

The previous Wednesday, Denis Faul had made a very public appeal to the next-of-kin of Bernard Fox and Liam McCloskey to intervene to save their liveshe barbarity of H-Block, or to gain the rightful recognition of a political prisoner, but primarily because what is lost in here is lost for the Republic and those wretched oppressed whom I am deeply proud to know as the 'risen people'."

. Faul was using the emotional vulnerability of relatives as a powerful lever against the Hunger Strikers and the prisoners' statement said that Fr Faul had "emerged as the best friend the British Government has." By the Wednesday of that week the foremost Hunger Striker - Pat Sheehan - had gone 52 days without food. He was having trouble with his eyesight and weighed only seven stone. By then the five others had completed the following days on Hunger Strike: Jackie McMullan, 45 days; Gerry Carville, 31 days; John Pickering, 24 days; Gerard Hodgins, 17 days and Jim Devine, ten days.

Along with the obstacles created by Denis Faul's tactics was the Irish Government's failure to put pressure on the British Government. The Irish establishment refused to take the type of action needed to shift the British because it believed that the credibility of the IRA was linked directly to the success or failure of the Hunger Strike.

For the same reason, Briti