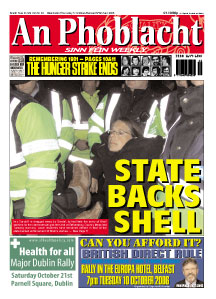 Dozens of Shell-to-Sea protesters were asked to move aside and when they refused, a line of Gardaí moved forward as protesters fell to the ground, reciting the rosary in Irish.

Local teacher, Maura Harrington was the first to be lifted and removed by two Gardaí. "This is as close to martial law as we've ever seen in this country," she said.

Micheál Ó Seighin, Willie Corduff and Vincent McGrath of the Rossport 5 were also among those removed by Gardaí.

At 3am, the biggest Garda presence ever seen in north Mayo - reported to number 170 gardai in total - arrived at Bellanaboy, the proposed site of the controversial terminal for the Corrib gas project. Gardaí, it appears, had been drafted in from every region in the 26 Counties.

At 7.45am, a convoy of ten cars and jeeps containing Shell employees entered the site to a chorus of 'boos' and chants of 'cowards'.

Sinn Féin Spokesperson on Natural Resources, Martin Ferris TD condemned the decision by the Department of Justice to order the Gardaí to break up the picket at Bellanaboy. He demanded to know why the Government is so anxious to enforce the wishes of Shell in relation to the Corrib gas development.

"It is ironic that on the day that the Dáil will question the Taoiseach on his personal finances, that a Fianna Fáil Government is seen to be clearly enforcing the wishes of a multinational consortium against the will of the local people and against the best interests of the Irish people as a whole", Ferris said.

He went on: "Des Richardson is one of those who assisted the Taoiseach in his time of need. He is also a person who was close to Enterprise Oil when they secured the contract for the Corrib field and who cleared the Fianna Fáil debt through undisclosed donations from big business. Enterprise demonstrated their gratitude by hosting the fund raising tent for Fianna Fáil at the Galway Races. Shell have been the ultimate beneficiaries and I am certain that they are no less grateful.

"Bertie Ahern's personal finances are small beer compared to the huge scandal of the giving away of our gas to companies that pay almost nothing in return in the way of tax or royalties. The question has often been posed as to why this was done and the fact that Shell and others are terrified of revealing the terms of the rotten deal made raises suspicions of the nature of the relationship between Fianna Fáil and the oil companies. On the day that the Gardaí are forcing protesters off the road in Mayo at the behest of Shell the question needs to be posed: Why is the Fianna Fáil piper so willing to do their bidding?."

On Wednesday Ferris voiced his disappointment at the refusal of Minister Noel Dempsey to make available documents relating to the development of the Corrib gas field. The documents in question detail the terms of the lease granted to the Shell-led consortium, the plan of development for the pipeline and the quantitative risk assessment of the terminal at Bellanaboy. The documents are the subject of a discovery order by the High Court but Shell is refusing to make them available. In a reply to a written question from Ferris, Noel Dempsey stated that he was legally prevented from releasing the papers.

Ferris said that in light of the situation at the Bellanaboy, and in the interests of facilitating the settlement, such an atmosphere would be promoted by the release of the documents.

"Given that the state has possession of the documents but does not presumably have the same interest in concealing their content as the consortium in question, I cannot understand why the Minister should not make them available", he said.