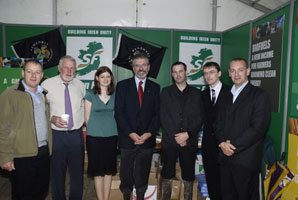 Sinn Féin is setting out its pre-election priorities for rural development and agriculture at the event, and will launch a key discussion document on the retention of the sugar beet plants at Mallow and Carlow and Ireland's sugar processing industry.

Speaking ahead of the event Gerry Adams said: "The number of organisations, businesses and groups that have taken stalls at the Championships this year is indicative of the strength and vibrancy that remains in rural communities. This is all the more creditable when we appreciate the decline in family farming and the lack of substantial investment in rural areas.

"Government indifference to the plight of rural communities, combined with an urban-centric economic development policy, has led to a massive demographic shift in Ireland's population over the last four decades. Communities have been forced to wage decades-long campaigns for access to healthcare, as at Monaghan Hospital, or access to public transport, as with the West-on-Track campaign.

"Sinn Féin believes we need a more even distribution of economic growth and investment, and real decentralisation, not just of civil servants, but of power and resources. We need to maximise the potential that exists in the bio-energy sector for farmers to tackle energy poverty, reduce our dependence on fossil fuels, and to ensure security of energy supply.

"But we also need to listen. Too often the people furthest from the corridors of power in Dublin are ignored, misunderstood and misrepresented by an urban political and media establishment. Events like this are an opportunity for that ignorance to be confronted and I am delighted to be able to attend today with my party colleagues."

Speaking prior to the meeting the Kerry North TD said: "The asset stripping of this successful public enterprise and the huge profits made by Greencore from the closures at the Mallow and Carlow sugar plants was nothing short of a disgrace. What added insult to injury was that the Government, who maintained a golden share in the company, stood idly by and allowed this to happen.

"The sugar plants at Mallow and Carlow should be maintained for the production of ethanol as a bio-fuel. This would help us to meet our European requirements that bio fuel replaces 5.75% of petrol imports by 2010 and, more importantly, it would maintain an Irish sugar industry and provide a stable income for growers and producers in Ireland. At a time when the rural way of life and farming are coming under such intense pressure we cannot afford to throw away this strategic crop", Ferris said.

"The government have the power through the golden share to negotiate for the transfer to the state of these plants at a reasonable price. What is needed now is political will, the will to maintain and build on this traditional Irish industry", he added.