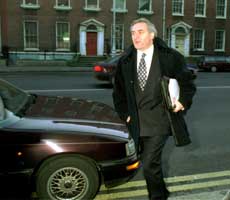 Ahern getting away with 'bigger scandals'

Bertie Ahern remains at the centre of a political storm this week over money he received while he was Finance Minister. The controversy emerged after it was revealed that the Mahon Tribunal is investigating if the Taoiseach received money from property developer Owen O'Callaghan.

Ahern insisted on Tuesday he did nothing wrong by accepting payments that he described as loans from friends. He made the comments in a televised interview following intense pressure after leaked documents last week forced him to confirm he was being investigated by the Tribunal.

Ahern said he received two payments totalling €49,520 from two different groups of friends in 1993 and 1994 and that he viewed these as loans which he would repay with interest.

However, he said he had not yet repaid either the money or any interest.

An emotional Ahern denied any wrongdoing by accepting the money, saying he agreed to provide money for his children's education as part of the separation from his wife. He added that he had broken "no codes, ethical tax, legal or otherwise".

Last week the Taoiseach denied he had questions to answer, saying the matters were his "own private business".

For the last nine years the Mahon Tribunal has been investigating payments involving property developers and government representatives, many of whom were members of Fianna Fáil.

Sinn Féin Dáil leader Caoimhghín Ó Caoláin said the reality was that the Taoiseach had been "let off the hook" on bigger scandals than those alleged in the current controversy. He said the facts revealed on Tuesday regarding the manner in which property developers were being allowed to "shred" Part V of the Planning and Development Act and refuse to build social and affordable housing in the 26 Counties showed the "hand-in-glove relationship" between the Fianna Fáil/Progressive Democrat Government and unscrupulous developers.

The Cavan/Monaghan TD said: "Most people will question why the Taoiseach received large donations and/or loans from a group of business people and why he did not address his personal affairs, including legal bills, in the way most people do. The only reason this is in the public domain is because the Mahon Tribunal is investigating if the Taoiseach received money from property developer Owen O'Callaghan.

"The reality is that the Taoiseach and his Government have been let off the hook on bigger scandals than those alleged in the current controversy. At the core of these scandals is the close relationship between the Fianna Fáil/PD government and property developers and the oil and gas industry. These scandals include:

"All of these measures are legal but totally unethical and against the public interest. The Taoiseach and his colleagues should be held accountable for them", Ó Caoláin said.

Sinn Féin announced on Wednesday that it would publish legislation during the current Dáil session to reverse the changes to the Part V of the Planning and Development Act brought in by the government in 2002. Caoimhghín Ó Caoláin described Fianna Fáil as being owned 'lock, stock and barrel by the construction industry' while Social Affairs spokesperson Seán Crowe TD challenged the other parties to support Sinn Féin's legislation.