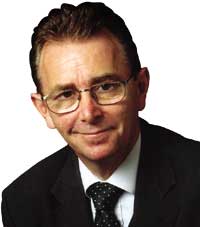 It was with deep shock and profound sadness that republicans across Ireland learned on Monday of the death of Michael Ferguson. Ferguson, a Sinn Féin MLA and Councillor and a former political prisoner, died suddenly during the night last Sunday. He was 53.

Michael Ferguson had recently and bravely battled testicular cancer and on the very day that the news of his death was announced, an interview about his ordeal was carried on the front page of the Belfast-based Irish News. Michael Ferguson wanted to draw attention to the issue of testicular cancer and to encourage other potential sufferers to overcome embarrassment and get the necessary medical check-ups.

"I want to extend my deepest sympathies to Louise and their four children and to Michael's wider family circle.

"No one who met Michael could fail to see his passion for life and determination.

"Despite his illness, Michael's death will come as a great shock to the many people who knew and respected him," Adams said.

Married with four children, Michael Ferguson had been active in community and republican politics for most of his adult life. He graduated from Queens University in 1989 and was elected to Lisburn Council in 1999.

Elected to the Six County Assembly at the last election, Michael Ferguson was the Sinn Féin Spokesperson on Education and led the campaign against education cuts in the North.

He held a number of influential positions on Lisburn Council in the face of unionist threats and intimidation. As a Councillor and committed community activist, he led a number of successful campaigns on housing, traffic calming and against the siting of mobile phone masts in residential areas.

He recently helped secure £186,000 for the Ballymurphy community, for the delivery of an intervention programme to support young people in the area.

Michael Ferguson was well known as a founder member of the West Belfast Safer Streets Campaign Group. Through this work he challenged anti-social behaviour, developed initiatives to tackle crime and created opportunities for young people to contribute positively to the community.

He had a personal interest in environmental and horticultural issues and won a number of awards for environmental improvement schemes.

Sinn Féin Assembly Group Leader and Upper Bann MLA John O'Dowd was among many from all political persuasions who paid tributes to Michael Ferguson in the days after his death.

O'Dowd said that Michael Ferguson "brought a huge energy and determination to his work. He championed the educational rights of children and young people and was instrumental in the campaign against cuts to education services."

O'Dowd went on: "He will be missed by everyone who was part of the Assembly team and on behalf of the team I want to extend my deepest sympathies to Louise, his children and his family and friends."

Sinn Féin Lisburn Councillor Paul Butler also paid tribute to his colleague. "I have been on Lisburn Council along with Michael for the last ten years and his death is a great shock to me. Together over the years we have battled and fought against Lisburn Council and its treatment of nationalists. He will be a huge loss in that battle.

"I know that I speak for my other fellow councillors on Lisburn Council, Jennifer McCann and Angela Nelson, that our thoughts and prayers are with Michael's wife Louise and his children Hugh Thomas, Daibhead, Niamh and Aoife. They have lost a loving husband and a dedicated father.

"Michael was someone who worked constantly for those most in need within our community. He was at the coalface of community activism and his many campaigns over the years on housing, the environment and education will be part of his legacy.

"Even through his latest illness, Michael continued working for his constituents and through his work as Sinn Féin Education Spokesperson, he represented all sections of our community irrespective of their religious background."

Sinn Féin West Belfast Councillor Marie Cush said that Michael never lost sight of the people he represented, was hugely committed and delivered "day and night" for the people of West Belfast.

"He was instrumental in securing financial assistance to the people of Ballymurphy, at a time of great uncertainty, that will particularly support our local young people.

"No problem was small and no mountain was too big. Michael will be missed by everyone who knew him," said Cush.

Tributes were paid also from representatives of the SDLP and the Ulster Unionist Party who had worked with Michael Ferguson in elected capacities over the years.