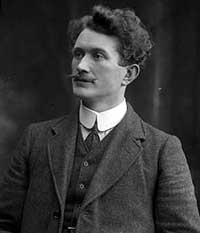 Born in 1885 in the small village of Lispole, near An Daingean, County Kerry, Thomas Ashe was educated locally. He continued in his studies until he qualified as a teacher in the De La Salle Teacher Training College in Waterford City. As a teacher, Ashe took up the position of Principal at Corduff National School in Lusk, County Dublin. He was a member of the Irish Volunteers and the Gaelic League. Through his links with these organisations, Ashe was recruited into the Irish Republican Brotherhood.

Evidence of the respect in which he was held could be seen when he was chosen to visit America on a fundraising trip. It was during this time that he met such other notables as John Devoy, Joe McGarrity and Roger Casement.

On Easter Sunday, 1916, Ashe was the commanding officer of the Dublin 5th Battalion of the Volunteers. During the Rising, Ashe and his Battalion of just 48 men led many successful attacks and ambushes on military barracks around the North Dublin area. This group successfully demolished the Great Northern railway bridge, thus disrupting access to the capital. In addition, they captured the Royal Irish Constabulary (RIC) barracks at Ashbourne, County Meath. The fight to gain control lasted six hours, during which 11 RIC men were killed and over 20 wounded. By comparison, the Fingal Battalion lost only two men and five were wounded. Ashe and his men captured three other police barracks with large quantities of arms and ammunition which kept their guerrilla war going. When news of the surrender reached Thomas Ashe, he laid down his arms and was arrested, court-martialled and sentenced to death. The sentence was later commuted to life imprisonment.

Ashe was released as part of the General Amnesty in June 1917 and immediately became involved once more in the independence movement. He was elected President of the Irish Republican Brotherhood, taking the place of the executed Pearse. He travelled the country campaigning for Sinn Féin, making speeches which the authorities deemed were "calculated to cause disaffection".

He was re-arrested for sedition and incitement of the population on 15 July 1917 and sent to Mountjoy Jail. He demanded to be given Prisoner of War status, including the right to wear his own clothes and associate with his fellow inmates as soldiers. When the authorities refused, Ashe and six of his fellow prisoners went on hunger strike. Ashe was put in a straitjacket and force-fed by the authorities. All requests to him to end the hunger strike were refused. He was adamant in his conviction, saying: "They have branded me a criminal. Even though if I die, I die in a good cause."

Administered by a trainee doctor, the process of force-feeding was often quite brutal and on the third day, Ashe collapsed shortly after the procedure. It was later discovered that, among other complications, the tube had pierced his lung. He was released immediately and taken to the nearby Mater Hospital. Two days later, he died of heart and lung failure.

After lying in state at City Hall, Ashe's cortege made its way through Dublin to Glasnevin Cemetery on 30 September 1917. It is estimated that 30,000 people lined the streets, some having travelled great distances, overcoming such obstacles as limited transport to attend.

At the graveside, three volleys were fired and then Michael Collins stepped forward and made a short and revealing speech in English and Irish.

"Nothing additional remains to be said. That volley which we have just heard is the only speech which it is proper to make above the grave of a dead Fenian."

The death of Thomas Ashe had a striking effect on the attitude of the Irish people. The brutal manner of Ashe's death, superimposed upon the summary executions of the 1916 leaders and other atrocities committed by the Crown Forces, galvanised the nation. Committees sprang up all over the country to pay tribute to the memory of this brave man, indirectly fuelling the fire of Irish independence.