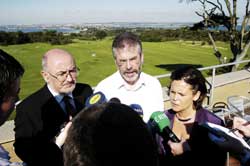 Media priorities are quite clear: Sinn Féin must be given as little coverage as possible

What makes a story newsworthy is to some extent a matter of personal taste and mood, but the extent to which the major media agree with each other on what constitutes newsworthiness is clearly not just coincidental: it reflects the prejudices and the political interests of those who own the media concerns.

That's one of the reasons why a very marginal party like the Progressive Democrats - with only the slightest of chances of playing any role in Government formation after the next election - gets such consistent and extensive coverage.

Michael McDowell's elevation to the leadership of his party was warmly greeted in the media, with the Irish Times particularly effusive in its praise of the great man.

So much so, indeed, that, despite that paper's long expressed preference for encouraging Labour to throw in its lot with Fine Gael to provide a "viable alternative" to Fianna Fáil, the Times decided to ignore Labour and concentrate on the PDs in its political coverage.

Both parties held their parliamentary "think-ins" - though 'think-outs' might be a more apt title - at the beginning of this week; but anyone who read their Monday morning Times or Independent would have been left blissfully unaware that Labour was doing anything.

Both papers were absorbed by what the PDs were up to, and speculated extensively on the latest makey-up leak about reducing stamp duty as a ploy to win votes from, they hope, an eternally naïve electorate. They completely ignored the Labour conference in Cork.

RTÉ also led with the PDs and whipped up a storm of discussion about the stamp duty nonsense, leading to further speculation about rifts in the Government and so on. Labour were tagged on at the end of the lead reports.

There was more bad news for Labour, of course, when the Irish Examiner published its poll in the middle of their conference and showed that Labour's support was down and satisfaction with the Government was up.

While there were many valid reasons for being sceptical about this poll, which was in quite a contrast to other polls published over the last year, Labour's whine about the figures only served to show them up as sore losers.

Contrast this, with the effusive way that the previous week's Fine Gael stunt was covered. There was almost no politics publicly discussed in Sligo by Fine Gael, yet the papers were full of predictions about how many seats the Rainbow would win, and Frank Flannery's sleight of hand in the mirrors was faithfully reported as established fact.

The gulf between the declared politics of Labour and those of Fine Gael was not an issue that any of the papers wanted to explore, so the little bit of coverage that Labour did get concentrated on sneering at their wild speculation about seat gains in the next election.

But before they get carried away with feeling sorry for themselves, they still got more coverage than Sinn Féin did for its pre-Dáil session with elected representatives in Howth. Media priorities are quite clear on this: Sinn Féin must be given as little coverage as possible, and Labour coverage should be confined to the safe areas where Labour is in tune with what the media want them to do - act as an opposition to any manifestation of a pro-nationalist agenda, and back the Blueshirts to the hilt.

Expect more of this as the election comes nearer, and don't rule out a Labour-PD coalition along with Fine Gael. Now that sounds like heaven to Tony O'Reilly.

Listeners to RTÉ during the week might have been shocked to hear a reporter from that station demand that Taoiseach Bertie Ahern respect the democratic wish of the people.

But no, Pascal Sheehy was not talking about popular anger at the health service and the proposed closure of local hospitals. He wanted the Taoiseach to give a commitment to accept the verdict of the business minority in the Kerry Gaeltacht town of Daingean, and ignore the law passed by the Oireachtas and change the name of the town to Dingle-Daingean Uí Chúis.

Sheehy's choice of language clearly showed where he stood on the issue, but is it right for RTÉ to let its staff wave their Union Jacks so blatantly.

Certainly, if any reporter were to be so timorous as to demand that the Government respect the democratic will of the people of Rossport in relation to the Shell gas pipeline, RTE would remind him or her of the company's duty to report neutrally and fairly.

But when the Irish language is being attacked, RTÉ - and Pascal Sheehy - apply a different standard.