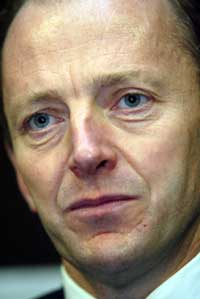 Relatives for Justice have called for an independent inquiry after it emerged that the recently-created PSNI Historical Enquiries Team (HET) has been unable to locate RUC files relating to at least 1,000 killings. Some of the missing files are believed to be linked to shoot-to-kill and collusion cases.

The group has written to the Ombudsman Nuala O'Loan and the British Secretary of State Peter Hain to express their concern. Spokesperson Mark Thompson said that the disclosure raised further questions about the HET's ability to properly investigate killings.

"The fact that so many files are 'missing' only confirms the view that the practice of destroying and concealing evidence was systematic," said Thompson.

"We already know that key forensic evidence was routinely concealed or destroyed but not on such a scale. Families have yet again been dealt another blow. We need to see accountability and RFJ has called on Peter Hain to initiate an immediate inquiry."

"The task cannot fall to the British Government to determine how truth recovery is achieved. The British Government and its agencies are key protagonists in the conflict and the state continues to use its power to thwart full exposure of its own wrongdoings," said Mark.

There have been around 400 contentious killings directly carried out by regular British state forces but only three members of the British Army and no members of the RUC/PSNI have ever been prosecuted in cases resulting in convictions securing life sentences. A further 1,000 killings have been carried out by irregular pro-British forces, often with the direct collusion of state agencies like Special Branch, FRU and MI5.

In sharp contrast to the handful of cases pursued by the state against its own forces, over 15,000 republicans have been convicted and jailed during the conflict. Clearly the British Government has the most to fear from further disclosure. RFJ views the HET as a continuation of a cover-up strategy designed to shield the British state.

"The HET emerged in the aftermath of a European Court ruling that found procedures used to investigate British state killings in the North of Ireland were in breach of international standards and did not comply with Article 2 of the European Court of Human Rights," said Mark.

RFJ sees the HET as a counteroffensive against the opportunities the European ruling afforded to families of the victims of state violence to further pursue their quest for the truth.

"The reality is that the British state goes to extraordinary lengths to prevent facts from emerging in killings its agencies carried out or sanctioned. We need only look to the Inquiries Act in relation to Pat Finucane and the use of Public Interest Immunity in other cases. The HET is not independent and will have extreme difficulty in delivering on the hundreds of controversial killings for which the British state is culpable," said Thompson.

The HET began its life with talk of a cold case review team and with the serious crime review emerging out of that. During the Police Federation's annual conference, Erwin Montgomery had talked about the need for justice for RUC officers killed during the course of the war.

"Emerging from this selfish strategic position the notion was exclusive. Montgomery went on to dismiss the idea of any kind of inclusive truth recovery process. For the Police Federation it was just a matter of 'catching the terrorists'. This was part of a broader approach by unionists who sought to maintain a hierarchy of suffering in which unionists were right and republicans were wrong," said Mark.

As PSNI Chief Constable, Hugh Orde also adopted a selfish strategic position, essentially a policing view, in which he initially cited "1,800 unsolved murders" - a figure which excludes killings by the British Army and RUC. Public opinion later forced Orde to tacitly recognise this omission by referring to "a number of killings carried out by the British Army and RUC in the course of carrying out their duties".

From the outset, RFJ identified the HET as a limited PSNI initiative devoid of the kind of international and independent mechanisms required by a real truth recovery process. The British Government's announcement of a £32 million budget for the HET merely indicated the state's determination to maintain its stranglehold.

"The HET was a mechanism that emerged at a time when there was an ongoing broader debate within civic society. There had been acknowledgement by a large number of people from all different backgrounds of the need for a truth recovery process," said Mark.

"That acknowledgement had been underpinned by a clear recognition that any such process had to be independent. I think there was uneasiness within the NIO and the circles around the policing and military establishment about the nature and direction of that debate. In my view the establishment of the HET was part of a process designed to arrest that debate, regain control and push it in their direction," said Mark.

In May 2004 the then-British Secretary of State Paul Murphy announced a consultation into "ways of dealing with the past". This followed a statement to the British House of Commons by Murphy in which he declined to carry out Cory's recommendations for an inquiry into the killing of Pat Finucane.

"After several months it became clear that not one single person affected by the conflict, from whatever community they came, had been consulted. The entire exercise was clearly a stunt to buy time to construct a process that would ensure British control. The consultation announced by Murphy was not an independent exercise, as promoted by those campaigning for truth recovery. It was NIO-led, an agency with a vested interest in the outcome," said Mark.

"A truth recovery process, in addition to delivering directly to victims, should also examine the causes, nature and extent of the conflict. For families affected by state violence this means examining policies such as collusion and shoot-to-kill as well as examining the role that institutions such as the courts, NIO and the DPP have played.

"A truth recovery process conducted with honesty, openness and integrity will contribute to establishing stable institutions of governance. Society will have understood and learned the lessons of the past and thereby contribute positively to any emerging human rights-based democracy. The refusal of the British state to disclose its role in the conflict locks us all into the past," said Mark.