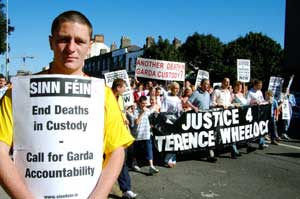 The first anniversary of Terrence Wheelock's death from injuries sustained in Garda custody was marked on Saturday, 16 September by a march from Dublin's Seán McDermott Street to Store Street Garda station, where he received his injuries. The march, which was attended by over 500 local people and public representatives including Sinn Féin Dublin City Councillor Christy Burke, clearly showed the level of local anger arising from the young man's death