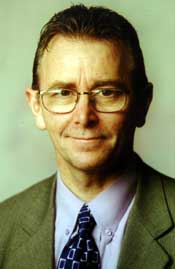 A report into the collapse of the proposed West Belfast Springvale Campus initiative, once earmarked as a flagship development project by both the American and British Governments, is being stalled by the NIO's Department for Employment and Learning.

"Sinn Féin met with the Auditor General earlier this year. As a result of that meeting a wide-ranging investigation into the collapse of the Springvale project was initiated by the Auditor. We now know that the University of Ulster pulled out of the project because the community sector was involved," said Ferguson.

"It looks as if the University of Ulster had hoped to cream off the financial advantages of locating a project in an area attracting huge public investment without incurring any responsibility towards the community, whose poverty earmarked the area for regeneration in the first place," said Ferguson.

"The fact the Department of Employment and Learning is stalling publication of the Auditor's report begs the question, what is the department trying to hide? Clearly the Department of Employment and Learning would have had a key role in overseeing such a major project. Their apparent fear of public scrutiny raises the question, what part did they play in its collapse?

"Local communities, from the Shankill to the Falls Road, bought into supporting the University of Ulster plan to build a university campus as a means of regenerating West Belfast. During a grand announcement of regeneration Tony Blair and Bill Clinton ceremoniously cut the sod at the Springvale site together, heralding a new beginning for the interface and a boost for the peace process. The decision to pull out of the development had a devastating impact on the morale of those communities.

"Furthermore, the promise of a new university campus in West Belfast has undermined the potential for greater development within existing institutions already serving the community of West Belfast, the Whiterock Institute for Further and Higher Education for example.

"The net impact of the Springvale project collapse has been the undermining of resources, both in terms of jobs and educational opportunities, which have flowed out of an area already identified as disadvantaged.

"The people and agencies, particularly those financed from the public purse and tasked with overseeing the implementation of public policy, must be held accountable and mechanisms put in place to ensure further debacles can be avoided," said Ferguson.

Meanwhile, Una Gillespie, a former member of the Springvale Board, has compelled the Department of Employment and Learning to release some details of the report. Documents released under Freedom of Information legislation confirm that community involvement was a deciding factor in the decision to scupper the Springvale project.

In 2002, funding problems were cited as the main reason behind the University of Ulster's decision to pull the plug on Springvale.

But minutes from a meeting held in December 2001 between University vice chancellor Professor Gerry McKenna, Dr Robson Davison of the Department for Employment and Learning and a number of prominent University of Ulster professors show that the main stumbling blocks were the level of community involvement and concerns over Springvale's ability to attract students from outside West Belfast.

The minutes state, "In discussion it became clear that UU's main concern was the difficulty of reconciling the autonomy of a university, especially in academic matters, with the degree of involvement now expected by the local community representatives."

Gillespie, who now works for West Belfast Economic Forum, said she was outraged that the West Belfast community had been kept in the dark over the real reasons for the failure of the Springvale campus project.

"The UU unilaterally decided not to go ahead with a £50 million project and the reason they gave at the time was that they didn't have the resources and yet at the same time they were poring millions into Magee and Coleraine," said Gillespie.

"From the outset this campus was planned to be a unique project between the UU and the community. It was to be a flagship peace and reconciliation project for the north and west of the city and the funding was provided on the basis of it being a joint project with the community.

"It was to be the biggest single investment project in this community and it didn't happen on the whim of the university's hierarchy. It smacks of bad practice on the part of government and prejudice on the part of the UU," said Gillespie.