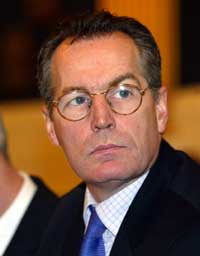 In an interview with the Belfast Telegraph on Wednesday, Sinn Féin spokeperson on Justice and Policing, Gerry Kelly MLA said that a decision by Sinn Fein to participate in policing could come within weeks of a timeframe being agreed for the transfer of powers to democratic political institutions in Ireland.

With political talks scheduled for Scotland as the November deadline looms for the restoration of the institutions under the Good Friday Agreement, Kelly said that what Sinn Féin envisaged was a new beginning to policing that republicans could fully support. But he stressed that the "full package" of police reforms had yet to be delivered.

The restoration of the political institutions and the transfer of policing and justice powers to those institutions were crucial for republican participation Kelly said. In such circumstances Sinn Féin would hold a special Ard Fheis on the issue, within "weeks rather than months".

Pointing out that the policing issue was a very difficult and complex one for republicans he said: "Some people have described it as being as big as the Good Friday Agreement in republican terms."

In the event of republicans endorsing policing, Kelly said such involvement would not be "half hearted" but 'full-bodied".