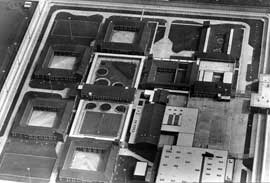 Sinn Féin Assembly member for Foyle Raymond McCartney has once again urged the British Government to act decisively to resolve the situation in Maghaberry. McCartney's comments came as prisoners on the segregated wing began a 72-hour fast.

"In August 2003 Sinn Féin made it clear to the British Government that the practice of forced integration which they were attempting to operate within Maghaberry was flawed and doomed to failure. Shortly after this the British Government did introduce a segregated section within Maghaberry to house republican prisoners in the face of opposition from the Prison Officers Association," McCartney said.

He went on: "Unfortunately since then the regime imposed on the segregated wing differs greatly from other parts of the prison and has led to significant difficulties for both the prisoners and families visiting the prison. Sinn Féin has received numerous accounts of persistent strip-searching, petty regulations and difficulties accessing educational facilities.

"If the situation on the segregated wing in Maghaberry is to be resolved then the British Government must come to the realisation that prisoners have the right to be treated in a humane fashion regardless of their political or religious affiliation and that conflict within the prison system is in nobody's interest. This situation can be resolved if the necessary political will is displayed," he said.