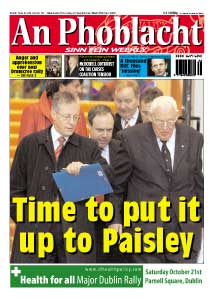 Governments need to up the ante

There are now just ten weeks left until the 24 November deadline for the restoration of the political institutions of the Good Friday Agreement. On the surface, the DUP appears intent on breaching the deadline and avoiding taking the political decisions necessary to see the return of power-sharing government in the North. Amid a growing sense of urgency, it is now clear that both the Irish and British Governments need to spell out the alternative in stark terms. The DUP's political thinking seems to be based on the belief that it can prevent change by exercising a veto on the political process.

In the absence of a defined alternative, DUP intransigence seems set to continue.

In an opinion piece in the Sunday Life newspaper of 17 September, the DUP's Peter Robinson claimed that as a committed devolutionist he supports the restoration of the political institutions, but went on to pour scorn on the November deadline, regarding it as little more than an arbitrary date. In the article, he lists the issue of policing as one of the main obstacles to DUP participation in a power-sharing government. Sinn Féin's position is that the issue of policing can only be resolved when responsibility for policing is transferred to local democratic structures.

Britain's Political Development Minister in the Six Counties, David Hanson, speaking on BBC One's Politics Show on 16 September, warned of "dire consequences" should the November deadline pass without agreement on restoration of the institutions. Hanson was referring to the loss of salaries and allowances and the fact that it would be a long time before another attempt was made to restore the Executive and Assembly. Thus far the two governments have been vague about what the alternative is, although they have said that they will proceed with implementation of all other aspects of the Good Friday Agreement and that, should the institutions remain closed, they will strengthen the all-Ireland dimension.

This followed a meeting the previous day at which Bertie Ahern and Tony Blair reviewed progress on the restoration of the institutions and sought to finalise plans for a meeting of political parties in the Six Counties at St Andrews in Scotland in October.

DUP leader Ian Paisley declared outside Downing Street on 13 September that he had no interest in attending the proposed meeting, once again reiterating his intention to let the 24 November deadline slip. Sinn Féin Chief Negotiator Martin McGuinness said that Paisley's latest declaration should finally focus minds in Dublin and London.

"Yesterday Ian Paisley set out in a very public fashion in Downing Street his view that the DUP were not up for sharing power with nationalists and republicans by the 24 November deadline. Given Ian Paisley's political record and the fact that the two governments have allowed the political process to drift for so long in the face of DUP intransigence, this claim will surprise few people," McGuinness said.

Returning to this theme at the Preparation for Government Committee on Monday, 18 September, McGuinness challenged direct ruler Peter Hain to state clearly the two governments' strategy for the restoration of the institutions in the coming ten weeks. "If it becomes clear that not all of the parties will commit to inclusive institutions, then they need to set out clearly their schedule for delivering all other aspects of the Good Friday Agreement in full," McGuinness said.

On the specific issue of policing, McGuinness said that it needed to be democratically-accountable and free of political influence. Sinn Féin has already set out its position on how this could happen, but it requires a functioning Assembly in order to transfer policing powers.

Peter Hain has called for the DUP to have face-to-face talks with Sinn Féin on the issue of policing. His statement to the Preparation for Government Committee failed to acknowledge any responsibility on the part of his government for moving forward the policing issue. At the same time, he admitted that the upcoming Ombudsman report into the 1997 killing of Raymond McCord in Belfast would severely embarrass the British Government, but attempted to draw a line under the report by saying it belonged in the past.

In a press briefing after the committee meeting, Sinn Féin spokesperson on policing Gerry Kelly MLA attempted to focus the debate by calling for the separating of what is needed to sort out the policing issue. "We could be very close to it if the DUP were to engage and stop being obstructive," said the MLA.

Meanwhile, Sinn Féin President Gerry Adams MP left Ireland for the United States on Tuesday for a series of engagements with senior political figures in advance of the upcoming peace talks. Adams will update the Americans on what is happening in the peace process and seek their support for ongoing efforts to restore the political institutions and implement the Good Friday Agreement. Adams will make a number of keynote speeches during the trip, including an address to the Council on Foreign Relations in New York.