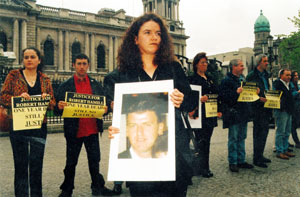 An inquiry into the sectarian killing of Portadown Catholic Robert Hamill suffered delay after 20 former RUC officers demanded anonymity. The officers have all been called to give evidence at the inquiry, which was scheduled to open at Belfast High Court on Monday 4 September.

Despite the fact that a number of measures are already in place, the former officers will not be seen entering or leaving and will not be photographed or filmed during the proceedings, they are demanding further anonymity.

The officers are taking a judicial review after the court refused their request to give evidence from behind a screen and identified only by an allocated letter or number.

A barrister for the inquiry, Ashley Underwood dismissed the officers' further demands as unnecessary on the grounds that their names were already in the public domain. They are already widely known, said Underwood.

The inquiry is one of four ordered by Canadian Judge Peter Cory following his probe into allegations of collusion and comes after years of campaigning by the Hamill family for an independent public inquiry into the killing and subsequent investigation.

The Hamill killing gained international notoriety after the media identified it as a "kind of lynching" and compared the reaction or lack of action by the RUC and other state agencies to the past compliance of southern American states with white supremacist violence.

Robert Hamill (25) was beaten to death by a unionist mob in 1997. The father of three had been returning home from a Catholic social club with three of his cousins when they were attacked. The gang had gathered at a crossroads specifically to identify targets walking towards a Catholic housing estate.

Robert Hamill and his cousin Gregory were knocked to the ground and repeatedly kicked and beaten about the head by the 40-strong mob. The mob chanted "kill him, kill him" and "die you Fenian bastard, die". Robert never regained consciousness and died of his injuries 11 days later.

The attack took place within sight of an armed RUC mobile patrol but the officers refused to intervene. Just prior to the attack, the officers had ignored an intervention by a man who had seen the mob gathering and warned the RUC of the potential danger to Catholics leaving St Patrick's Hall.

During the attack, the RUC ignored pleading by one of Hamill's female cousins for assistance. She had banged on the side of the RUC Land Rover calling for help.

After the RUC failed to intervene, Gregory's wife Siobhan and a second female cousin Joanne, threw themselves over the bodies of the two unconscious men in a desperate attempt to shield them from further blows.

After the attack the RUC made no attempt to administer first aid and only emerged from the Land Rover after an ambulance arrived at the scene.

In the immediate aftermath of the incident, the RUC made no attempt to arrest any member of the mob. Questions have been raised about the curious confidence of members of the mob, who carried out a brutal attack in front of the RUC without making any attempt to obscure their identity or make their escape afterwards.

Following the incident the RUC released a number of misleading press statements. Initially the RUC characterised the incident as a "clash between rival factions". They only admitted ten days later, when it was clear that Robert Hamill's injuries were fatal, that "four people were set upon by a large crowd and viciously beaten". At one point the RUC also claimed they had "immediately intervened" but were forced to retreat after they came under attack.