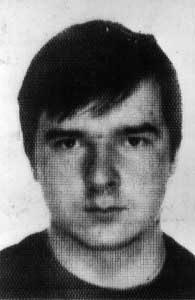 The family of Pearse Jordan, an IRA Volunteer shot dead in an RUC shoot-to-kill operation 14 years ago, have reacted angrily to a letter sent to their home and addressed to their dead son.

The letter from the Department for Working Pensions sought to advise Pearse Jordan about his retirement and making provisions for his pension.

Jordan was just 23 in November 1992, when his car was rammed by an undercover RUC special unit as he drove along the Falls Road in West Belfast. He was shot three times and died a short time later.

Witnesses said no warning was given before the RUC opened fire. RUC claims that Jordan was armed the car carrying an explosive device were subsequently exposed as untrue.

In 2001, the family successfully challenged the British Government's refusal to hold an inquest into the killing but despite the European Court ruling, years after the shooting, no inquest has been held.

The Jordan family was upset by the letter addressed to their son, 14 years after his death and from "the same government responsible for murdering our son and a government who still refuses to hold an inquest into his killing".

"We don't know if this is something deliberate or not. In the past we have been subjected to harassment by the 'authorities', particularly the RUC, simply because we have sustained a 14-year battle for truth and justice," said Hugh Jordan.

"The fact that an inquest has still not taken place means that we do not have a death certificate for Pearse 14 years after his murder. Maybe this is the reason we received the letter -- the fact that Pearse's death is not 'officially' registered because there has been no inquest," said Hugh.

"If this is the case then there needs to be a system which, in contested and controversial state killings where inquests are deliberately delayed, can notify the relevant agencies in order to avoid families receiving upsetting and unnecessary mail to people deceased," said Hugh.

The Jordan family are writing to the British Minister responsible for Working Pensions, John Hutton, outlining the hurt his department has caused.

"John Hutton lost a son, albeit in very different circumstances, and we wonder if his family were to receive a similar letter then how would he feel. If this is a genuine mistake due to a lack of a death certificate, then I will raise the matter with my local MP, Gerry Adams, and seek his advice in preventing other families in a similar position receiving upsetting mail," said Hugh.