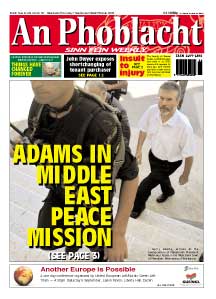 'War is not the only option'

Speaking to An Phoblacht from Palestine on Wednesday afternoon, Sinn Féin President Gerry Adams, who is on a two-day peace mission to the Middle East, said that in discussions with Palestinian President Mahmoud Abbas, with representatives of all the political groups in the Palestinian Assembly and with Israeli and Palestinian NGOs he had a clear sense that the Palestinian leadership wants the political process put back on the rails and for progress to be made.

He pointed out that 43 members of the Palestinian Assembly are in prison, including the Speaker and cabinet ministers and said the Palestinian peace process was being "bled to death".

He said the position of the EU, in punishing the Palestinian people for casting their votes in a certain way in an election that was supervised and verified by reputable international bodies and declared to be free and fair was "absolutely wrong".

Adams, who is in the Middle East at the invitation of the Palestinian President, said that he told the Palestinians that Irish people understood partition, occupation and the dispossession of lands. "The area we are driving through right now is bisected by a huge wall built by the Israelis", he pointed out.

The Sinn Féin President held a meeting with the Palestinian President's staff and advisors on Wednesday afternoon and he spoke to President Abbas by phone.

Following his meeting at the Negotiations Affairs HQ Adams toured various sites in Ramallah. He laid a wreath at the grave of former Palestinian President Arafat and also visited Ramallah Hospital, a refugee camp and Headquarters of the Red Crescent.

In Jerusalem on Tuesday evening on his arrival in the region Adams said the purpose of his visit was to encourage the search for a peaceful resolution to the Israeli-Palestinian conflict.

It had been the Sinn Féin President's intention for some time to visit Palestine and there was a long standing invitation from Abu Ammar President Arafat which Adams said he regretted very much not being able to take up while Arafat was alive. Various arrangements were cancelled because of the demands of the process in Ireland or of priorities in Palestine. Adams said that when President Arafat died he resolved to wait no longer and it had taken from then to fulfil that commitment.

He said Irish republicans were very concerned about the suffering of people in the region. Sinn Féin had no magic formula to resolve the problems but believed they could be resolved. "The Anglo-Irish conflict was once labelled as intractable. Talk of peace and of peace processes was dismissed as nonsense, as fantasy. But we proved the pessimists and cynics wrong", he said.

"There is an enormous responsibility on political leaders and especially on governments to find peaceful alternatives. Governments have a responsibility to give leadership which is hope and life giving. That is the big challenge facing the Israeli government.

"Building a political alternative, constructing a peace process which can deal with the causes of a conflict, and which can provide stability, justice and democracy, is an option also and one which would have the support of right thinking people worldwide.

"Of course the difficulties here are enormous. The conflict affects every aspect of peoples daily lives in Palestine and in Israel.

"The hostile reaction of the Israeli government, of the EU and of the United States to the election results earlier this year have compounded these difficulties. The withdrawal of financial support to the Palestinian government and the increase in violence is entirely counterproductive.

"What is required is inclusive dialogue based on equality and parity of esteem. It is patently obvious after decades of conflict that there can be no military solution to what is essentially a political problem.

"Irish republicans do not assume that what has worked in Ireland is relevant to every other situation. But we have learned that there are key principles which are applicable in any process of conflict resolution. These include inclusive dialogue,recognising democratic mandates and upholding human rights.

Adams said it was for people in the region to work out and agree solutions. He appealed to all political leaders to make a fresh effort to rebuild the peace process.

"All of us have to have an acceptance and openness toward other cultures. The notion that western culture or civilisation is better than any other is bogus. All cultures can learn from each other and change accordingly, peacefully and democratically. Suppression is not the way", Adams said.

"The role of the International Community and United Nations is crucial in all of this. So too is the role of the US government. The US, as a strong ally of Israel, has a key role to play.

"In the Irish Peace Process the US played a positive and encouraging role, recognising all of the democratic mandates of the participants, supporting dialogue, and dealing with everyone on the basis of equality. I would strongly urge a similar approach in respect of any efforts to rebuild the peace process here.

"What is clearly required is a comprehensive and inclusive settlement. Such a settlement must be rooted on the rights of the people of Palestine and the people of Israel to live in mutual respect, security and peaceful co-existence and co-operation. Israelis and Palestinians have more to gain from peace than continuing conflict", he said.