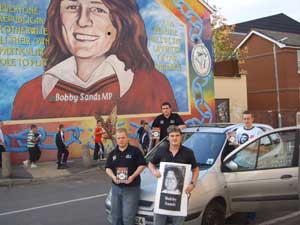 Ogra activists setting out on the tour from Belfast

Ógra 'On the One Road' to remember Hunger Strike

The day started with a vigil for suicide prevention and 1,000 leaflets were distributed throughout Belfast city centre.

A noticeable number of young faces were elected to the new Officer Board and are taking on various portfolios for the year on behalf of Cúige Uladh Ógra Shinn Féin.

Speaking after the meeting, O'Kane said: "There has been massive growth throughout the last year in Ógra. I would like to see this continue and am pleased to take up the post of Uladh Organiser. Three main priorities are bringing the suicide prevention campaign to an end, with the presentation of a petition to both the London and Dublin governments demanding an all-Ireland approach to suicide prevention. Another is the upcoming college freshers' fairs and a general recruitment campaign. A large Ógra contingent will attend a major health rally in Dublin in October."

Also last Saturday, Ógra began a seven-day 'On the One Road' Hunger Strike tour of Ireland. From Belfast, a convoy of Ógra activists travelled to Dundalk where the local Ógra organisation, republican activists and members of the public gathered at the Imperial Hotel for the launch of the Ógra Shinn Féin Hunger Strike publication Awaiting The Lark.

Paddy Agnew, a former Blanketman and TD for Louth in 1981, who contributed to the book, congratulated Ógra on its publication.

Sinn Féin Louth TD Arthur Morgan, who gave the main address, spoke of the importance of Ógra for the future and of his memories of the 1981 Hunger Strike.

The night was then brought to a conclusion with Eugene Garvey singing A Song for Marcella and Barry McNally playing Amhrán na bhFiann.

On Sunday morning, before continuing on to Dublin, the activists helped distribute over 1,000 leaflets in local housing estates.

Who could have known that the actions of 10 men in a prison in the north of Ireland could have changed so much, both nationally and internationally, that 25 years after their sacrifice we are still feeling the loss that was felt in 1981? That was how Sinn Féin MEP for Dublin Mary Lou McDonald summed up the 1981 Hunger Strike. She was speaking as a convoy of Ógra Shinn Féin members arrived in Dublin on Sunday, continuing their national tour of Ireland. Ógra Shinn Féin activists, along with senior republicans, gathered at the Corduff Centre in Blanchardstown for the launch of Awaiting The Lark.

Mary Lou McDonald then addressed the republicans gathered. She spoke of her memories as a nine-year-old watching TV pictures of a H-Block cell with men wrapped in blankets. She said she knew there was something utterly different about Ireland, with people living in these conditions.

Proceedings were brought to a close by the Chairperson, Ian Breslin, who ironically wasn't yet born at the time of the 1981 Hunger Strike. He summed up by stating that he was inspired by the sacrifice of the 10 men in 1981 and by all Irish republicans who played their part in the national liberation struggle.

"What happened in Long Kesh in 1981 was nothing short of inspirational. What a selfless commitment to a noble cause. What the 1981 Hunger Strikers did was sustain the desire for freedom in Ireland and, by their actions, skyrocketed the Irish freedom struggle. 25 years on, I urge all republicans to continue their fight. Achieving the Socialist Republic will be the ultimate tribute to the martyrs of 1981."