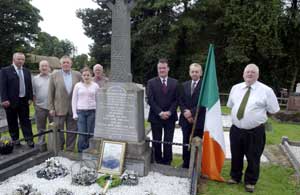 Fermanagh IRA leader Commandant Matt Fitzpatrick was remembered last Sunday, 84 years after his death. Friends and family members gathered for a short ceremony at his grave after a memorial mass at Drumalee, Belturbet, County Cavan where Matt was buried 84 years ago.

His nephew Richard chaired the commemoration proceedings, which heard of the circumstances of his death. This was followed by a reading of the Proclamation of the Republic. A lament was played by a lone piper.

Among those who gathered at the graveside was Clones native and Monaghan Sinn Féin Councillor Pat Treanor.