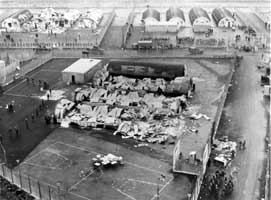 The aftermath of the burning of Long Kesh in October 1974

Sinn Féin Assembly member Raymond McCartney has called on the British government to finally come clean on the use of the lethal CR gas in Long Kesh in October 1974. McCartney's call comes after a group of former British soldiers admitted in interviews with the Daily Ireland newspaper that the gas used was not CS gas as previously stated by the British government.

Speaking on Wednesday Raymond McCartney said: "For decades republicans have believed that the British army used lethal CR gas fired from helicopters during the aftermath of the burning of Long Kesh in October 1974. The British government has long denied this, claiming that the substance used was CS gas. However those present who knew the effects of CS gas from the streets were adamant that the effects of the gas used on that night were completely different.

"In the years since, more than 50 former prisoners who were present on that night and were attacked with the gas have died or are suffering from cancer. In interviews with the Daily Ireland newspaper this morning three British soldiers present on the night confirm that the substance used was not CS gas. We also know that CR gas was being stored on the Long Kesh site at that time.