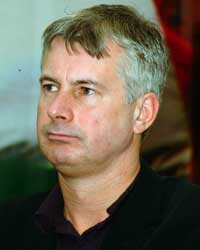 Sinn Féin's Social Affairs spokesperson Seán Crowe TD this week said he was not surprised at the results of an Economic and Social Research Institute (ESRI) monthly house price index which showed that house prices in the 26 Counties were up 15.4% in July this year. Arguing that the 26 County Government is interested only in 'creating the appearance of doing something, rather than actively challenging vested interests' he pointed out that the right to private property should always be secondary to the needs of the people.

The Dublin South-West TD said: "In 1997 when Fianna Fáil came to power, the average house price was €100,000. The ESRI figures show a continuing spiral, the effects of which are all too clear. The fact that the average house price across the state was €303,274 in July is unacceptable. This figure is up €25,000 more than December last year. In Dublin the average house now costs €408,959 and is continuing to rise. These are unreal numbers, beyond the imagination, let alone the ability, of thousands of families, increasingly forced out into the sprawling commuter belt around Dublin. But even here, house prices are going into orbit, with increases in Louth, Meath, Kildare and Wicklow of 18.6% in the last year.

"There is a crisis in terms of affordability and this Government has done nothing but give us less than half-hearted gestures with affordable housing schemes that are rife with problems, such as Minister Ahern's proposal on affordable housing yesterday. They are interested only in creating the appearance of doing something, rather than actively challenging the vested interests profiting off the housing crisis.

"This Government has continually failed to address a fundamental cause of house price increases that is the cost of building land and the speculation and land hoarding which is pushing that cost up.

"Sinn Féin is calling for a rights based approach to housing where the good of the people will be put before the profits of property speculators and developers. The right to private property, when such property is being held to jack up house prices, is secondary to the needs of the people."