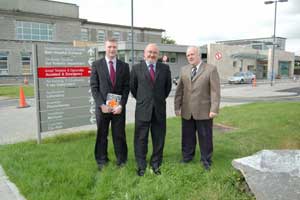 As part of a summer long series of visits to different parts of the country promoting Sinn Féin's new health policy, Healthcare in an Ireland of Equals, Sinn Féin Health spokesperson Caoimhghín Ó Caoláin TD visited Roscommon on Wednesday, 16 August. Following a tour of the local hospital, he formally launched the document in Roscommon's Royal Hotel where he was delighted at the positive response to the party's proposals.

He was joined during his visit by the party's General Election candidate for Roscommon/South Leitrim, Councillor Martin Kenny, and local Roscommon Councillor Michael Mulligan.

Speaking after the launch the Cavan/Monaghan TD said: "Since we launched Sinn Féin's radical new health policy, Healthcare in an Ireland of Equals a couple of months ago, party President Gerry Adams and I have visited numerous parts of the country to outline our proposals to the people. In the last several weeks I have been extremely pleased at the reception I received in Ennis, Nenagh and Kilkenny, places where Sinn Féin is fast becoming a recognised political force.

"My visit to Roscommon today included a lengthy and informative visit to Roscommon County Hospital where I met with senior management and consultant representatives. I was then given a tour around the hospital and its different services, meeting with staff in a number of departments.

"This was followed by a public meeting in the Royal Hotel in Roscommon where Sinn Féin activists from Roscommon and Leitrim were joined by a cross-section of local healthcare professionals, media and interested members of the public. Following the formal launch of our document, a lengthy question and answer session took place and I was delighted at the positive response to our proposals.

"Our programme of visits continues tomorrow in my local hospital in Monaghan, which will focus specifically on the newly built, but as yet uncommissioned, Treatment Room."