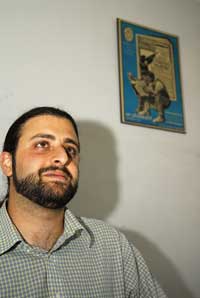 24-year-old Palestinian Faris Arouri is chairperson of the Peace and Freedom Youth Forum, based in the West Bank. His organisation lobbies political parties on national and social issues.

Faris is from Ramallah, a city in the centre of the West Bank. It has been declared for a long time that the capital of a Palestinian state would be Jerusalem, but Ramallah is the capital in the interim. Faris comes from a political family which was active in the Palestinian National Movement, a local branch of the PLO when that organisation was illegal.

When he was in Ireland recently, attending a youth conference, An Phoblacht got his views on the current crisis in Palestine, which has been overshadowed by the Israeli invasion of Lebanon

On the Palestinian election which resulted in victory for Hamas, Faris Arouri believes that internal problems within Fatah and other parties contributed to the result. They were not able to stand firm and offer an alternative to Hamas.

"The people had been living under the rule of Fatah since 1993 when the Palestinian Authority was established. There were problems like corruption and lack of productivity.

"Fatah is a movement, not a political party, but it has a vision of a secular Palestinian state with cultural diversity. Hamas is part of the International Muslim Brotherhood movement, a movement that exists in virtually all Islamic states. Hamas does not have a constitution. They claim that they have a Muslim ideology that's based on the holy books and writing of Mohammed."

He says that those seeking Hamas's vision for Palestine will encounter contradictions in what is being said by different Hamas representatives.

"Some say they want to liberate Palestine and later see what happens politically. Some talk about a democracy, others speak about an Islamic state. But on the ground that can't transform Palestine into an Islamic state. Palestine has always been a multi-cultural place. We have to distinguish Islam and political Islam."

Asked whether there is unease about the tactic of suicide bombings, Faris Arouri says that several prominent high-level Muslim clerics have stated that it is not permissible in Islam to carry out suicide bombings, while others see it as the only way to resist.

"The majority of Palestinians are against suicide bombings because they often target civilian areas. As Palestinian people we are quite informed as to what is a legitimate target and what is not. But at the same time many see it as the only form of resistance, especially in response to Israeli invasions and military actions.

"There is no other form of resistance. We cannot smuggle in weapons. The only weapons are SMGs (small machine guns) which are not effective against the Israeli war machine which comprises the most effective, modern weaponry such as tanks, etc.

"The public shift towards suicide bombings - when people accepted them, though not actively supported them - came about with the thought that they are at least doing something against the Israelis' use of tanks and jet fighters against civilians. The feeling was, 'The Israelis will get a taste of what they are dishing out.'

"We had civilian neighbourhoods bombed with jet fighters. You cannot respond to that with an SMG. Suicide bombings were seen as the only option. You can smuggle one person in, not a whole battalion."

On the impact of the invasion of Lebanon on events in Gaza, he says that it not only distracted from events in Gaza but also gave Israel the opportunity to extend its colonial activities without anyone even noticing.

"The whole population is imprisoned behind gates that they can lock. There is no way in or out. The people inside are nominally 'free' in there but they can't get in and out. They are not free."

On what is happening in Gaza now, the young Palestinian talks of daily bombings with Gaza itself closed so that nobody can go in or out. "Food and humanitarian aid cannot go in or out.

"The Israelis have managed to turn Gaza into the world's largest open prison - and the West has let them," he says.