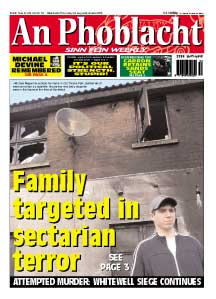 A solitary PSNI Land Rover sat just below the entrance to Old Throne Park on Sunday, 20 August. This was the only sign that the PSNI was taking seriously a loyalist attempt, hours earlier, to burn a Catholic family to death.

In the aftermath of the attack, PSNI Superintendent Nigel Grimshaw told the media, "We take this very, very seriously."

Yet for the residents of Old Throne Park his words sounded very, very hollow indeed.

A number of residents of the small private development had complained to the Police Ombudsman's office about the lack of PSNI action when loyalists torched three homes in the area on 20 June last year.

In that incident the lives of two families, including eight children, were endangered as their homes were engulfed in flames from burning oil tanks.

Local people identified three loyalists involved in those attacks yet the PSNI refused to arrest them.

And in a separate complaint, the Ombudsman is being asked to investigate why the PSNI refused to act against a crowd of drunken loyalists who confronted residents of the Old Throne Park just two weeks ago and threatened to burn them out of their homes.

On Sunday morning, 20 August, the loyalists carried out that threat.

At about 5.30 on Sunday morning Michael Magennis received a phone call at work telling him that his home in Old Throne Park was ablaze.

He rushed home to find that a neighbour had raised the alarm and got Magennis's partner Juanita and their baby daughter Mollie out of the house.

A gang had attacked the house from the grounds of a school which separates the unionist White City estate from Old Throne Park. As with the attacks of June last year, the arsonists used the oil tank to create an inferno that would engulf the house.

They set fire to the storage tank and the intensity of the blaze cracked the back windows of the house, including those of the bedroom in which Juanita slept with 12-week-old Mollie in the cot beside her.

The garden fence, a storage shed and all the fittings at the rear of the dwelling were completely destroyed, such was the ferocity of the fire.

Speaking to An Phoblacht, Michael Magennis explained that when his partner first heard banging at the front door, "she thought someone was trying to break in."

When she realised what was happening, Juanita escaped with the child.

Michael explained that the family slept in the back room for safety reasons and cited the loyalist incursion into Catherine Court, at the lower end of the Whitewell Road, in July.

In a sustained assault on the small cul-de-sac, up to five houses were targeted by a 40-strong gang armed with crossbows.

In one of the houses, a mother nursing her six-day-old baby was terrified as the loyalists tried to smash their way into her home.

As with many nationalist families targeted in similar circumstances they may now be forced to move from the house they saw as their dream home.

"It was our first home together," Michael said. "Now we will probably move out."

"This was a clear attempt by these loyalists to kill this family," said Sinn Féin Councillor Tierna Cunningham.

Cunningham, who was at the scene of the incident and witnessed the blaze, told An Phoblacht, "This was a terrifying experience for this young family and once again I would appeal to those with influence within the unionist community to work to ensure an end to such incidents."

Meanwhile, in a separate incident in the nearby Longlands estate, a 14-year-old girl narrowly escaped injury when loyalists hurled a brick through her bedroom window.

In the incident, on 18 August, the teenager spotted three loyalists at the rear of her home. Two bottles were also thrown through the kitchen window.

A member of the girl's family chased the gang but they made their escape towards the Rathcoole estate.