Restructuring of Sinn Féin Cúigí in Connaught and Ulster 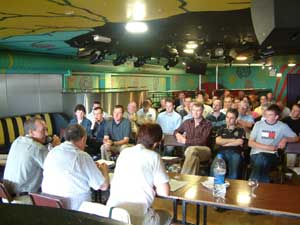 Sinn Féin's new Cúige Chonnacht held its first AGM in Moran's Hotel, Ballaghaderreen, County Roscommon on 23 July. Over 50 people were in attendance. The former Connacht-Uladh Cúige has recently been restructured with counties Donegal, Cavan and Monaghan joining Cúige na Sé Chontae. This development occurred in the aftermath of a motion to the party Ard Fheis aimed at giving the best organisational advantage to the local Sinn Féin structures.

One of the topics for discussion at the Ballaghaderreen meeting was the Hain Assembly and there was a lively question and answer session. Also present were Sinn Féin general election candidates Councillors Gerry Murray (Mayo), Martin Kenny (Roscommon/South Leitrim) and Seán McManus (Sligo/North Leitrim).

Speaking to An Phoblacht, Cúige Chonnacht Administrator Bernie Carroll said: "The meeting was very constructive. Having Caitríona and Mitchel down to speak made us feel more a part of what is going on currently in the Six Counties in terms of the Hain Assembly. The exchange also allowed us to demonstrate our keen interest in developments. It was reinforced to us that decision-making with respect to the Hain Assembly or any other issue wasn't simply the responsibility of leadership but is very much based on the opinions of party members at cumann level. Mitchel made it clear that the leadership require feedback from the wider party membership."