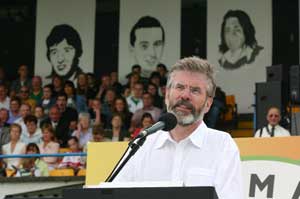 Sinn Féin President Gerry Adams delivered the main address at the rally in Belfast's Casement Park to mark the 25th anniversary of the 1981 Hunger Strike. He opened by paraphrasing the poem The Rhythm of Time by Bobby Sands:

There's an inner thing in every man and every woman.

Do you know this thing my friends?

It has withstood the blows of a million years,

And will do so to the end.

It has risen in red and black and white,

It lies in the hearts of heroes dead,

It screams in tyrants' eyes,

It has reached the peak of mountains high,

It comes searing 'cross the skies.

It lights the dark of this prison cell,

It is "the undauntable thought", my friend,

That thought that says "I'm right!"

Paying tribute to the legacy of 1916 hero Roger Casement, after whom Casement Park is named, Adams said: "He would understand exactly why we are here today."

He said that republicans had a right to feel proud. They had withstood everything that had been thrown at them over the years.

He welcomed a group of young Palestinians in Belfast as part of Féile an Phobail. Of those in the establishment and in other parts of the world who are often critical of republicans Adams said: "Let no hypocrite preach to us, while they condone what is happening in the Middle East. It is a disgrace. Let the government in Dublin for once stand up to the big powers and say that small people have the right to freedom and the right to justice."

Adams said that at different times in the cabinet room in Downing Street when he and others were meeting with the British Government, he often felt that the republican side of the table was crowded: "I often think as I look around that there is Bobby Sands behind us, keeping us right; there's Francie Hughes; there's Mairéad [Farrell]; there's Máire Drumm. All of those people who are part of our struggle, who have brought our struggle to where we are today."

He said that when republicans talk to the Irish and British governments they do so with an eye to the future. They were mindful also that people continue to be brutalised in British jails. "All prisoners are entitled to humane prison conditions, to proper medical facilities and to be treated with dignity." He called for the British Government to transfer all Irish prisoners seeking repatriation back to Ireland and to resolve the dispute in Maghaberry Jail. He welcomed the decision to repatriate Aidan Hulme but criticised the Irish Government for not being diligent or expeditious about getting him home as quickly as possible.

Adams said that the Hunger Strikers are role models. They had gone on a political offensive - a battle for hearts and minds.

He praised the families of all the Hunger Strikers, including those who moved to take their sons off the strike, saying they were motivated by love.

He went on to say that if republicans limited themselves to doing what they have always done they would get what they always got. "We are bigger than that. We my friends are on our way to freedom and freedom in our lifetime." He said republicans needed to continue to build a mass organisation, to stay united and to continue to be strategic.

"We need to have the confidence to take political power. This phase of our struggle is about transferring power from those who have no right to govern us to those who have a mandate. We are in a transitional phase of struggle on the road to a national republic. And we are not just about changing flags. We are about a new, egalitarian society on this island."

He said one of the big challenges facing republicans was to be avowedly anti-sectarian, to face up to the challenge of making peace with unionists. "And that means we should not be afraid of making correct strategic compromises. Bobby Sands was very clear about this. 'The day will dawn', he said, 'when all the people of Ireland have the desire for freedom to show. It's then we will see the rising of the moon."

Adams went on to say: "The Irish Republican Army - the wind that shook the barley - deserves our appreciation. Not just the comrades who are dead, not just the families of comrades who are dead but to the IRA of today - to the people sitting close to you - we are proud to be part of this huge effort to bring peace and justice and freedom to the people of this island.

"And this is not a dream. This can, if we do the right things, be the reality. Everything starts with a dream. We need to make believe and then we need to make it happen. That's what the Hunger Strikers had the courage and the confidence and the bravery to do. They faced down the strongest, most reactionary government in western Europe at that time." He said they took on "Margaret Thatcher and her cronies" and beat them.

Adams recalled in some detail the time that 25 years ago himself, Owen Carron and Séamus Ruddy visited the prison hospital in Long Kesh to meet the Hunger Strikers. By that point Bobby Sands, Francis Hughes, Ray McCreesh, Patsy O'Hara, Joe McDonnell and Martin Hurson were dead.

Adams visited Kieran Doherty, the TD for Cavan/Monaghan, who at this stage of the Hunger Strike was blind. Adams told him that he and Kevin Lynch could both be dead soon and that the strike could be ended there and then. Adams said that Doherty thought for a short time and then replied very calmly: "We haven't got our 5 demands and that's the only way that I am coming off. Too much has been suffered for too long. Thatcher can't break us. Leanaigí ar aghaidh. I am not a criminal. For too long our people have been broken - the Free Staters, the Church, the SDLP. We won't be broken. They think they can break us; well, they can't break us. Leanaigí ar aghaidh."

As the delegation left Long Kesh the other Hunger Strikers shouted: "Beidh an bua againn. Tiocfaidh ár lá." Four more prisoners were to die before the Hunger Strike ended.

Adams told the rally: "We don't have to do what they did but we do need to be like them - magnanimous, generous, brave and determined. We need to be strategic. We need to have their confidence in ourselves and in our position.

"The Hunger Strikers knew exactly what they were doing, why they did it and the effect their actions would have. We also, friends, know exactly what we're doing, why we are doing it and the effect our actions will have. And that is how we are going to continue to build this struggle, to build support for an end to British rule in our country and for a national republic. Kieran Doherty said it all - leanaigí ar aghaidh, he said. So let Kieran's spirit, and the spirits of all those other heroes who are with us today, be the message. We face the future confident in ourselves and in our ability. Leanaigí ar aghaidh. Tiocfaidh ár lá."