"Kick the US military out of Shannon" 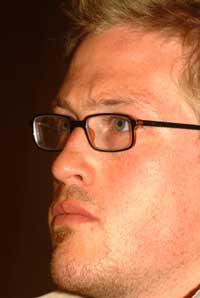 Joshua Casteel worked as a US military interrogator in the infamous Iraqi prison of Abu Ghraib between 2002 and 2005. His experiences in Iraq led him to become a conscientious objector and he was discharged from the US Army last May. Here, in the second of a two-part interview with An Phoblacht , Casteel says Shannon airport should be closed to the US military en route to the conflict zones in the Middle East.

An Phoblacht: How can soldiers rationalise the idea of travelling as far as Iraq and Afghanistan to fight a war?

Joshua Casteel: There is this great movie that came out in the US called Team America: World Police, and there is a song in it called America Fuckya and this is kind of the attitude a lot of people have. That is very naïve. It is not necessarily because of hatred towards other people, but it is pride in your homeland that gets exploited by the political ambitions of the military and there are great efforts made by the military and politicians to create a distance from the human reality of the destruction. There is a great effort made in the military to increase the use of technology in war. That makes it look as a video game. You don't see the dead bodies. This has a massive cultural effect upon the rest of the country and it is not until families experience the death of a son or daughter, or soldiers come back to the US with the memories of what they did, that reflection happens. But by that time, the rest of the country, that has not had that experience, finds it very difficult to merge that experience with their own experience.

That is why I and my other comrades in Veterans Against War try to speak as loudly as possible, as people who have experience and come from the communities that are being exploited by the politicians - to give people firsthand accounts of what we went through.

How many people are involved in Veterans Against War?

I think right now we are 400 veterans. There are people currently serving in the military. Some people are conscientious objectors and some were simply discharged but were really pissed-off about what they did and what they were asked to do.

We are still in our infancy but are kind of in step with the movement that grew up around Vietnam. Although they started with very small numbers, they became very organised and were able to collaborate with anti-war groups and to convince soldiers who were fighting the war to disobey orders, and to do things like running to Canada.

There are many people who are not formally part of our organisation but who are protesting in different capacities. There are hundreds of people who have gone 'Absent Without Leave' in Canada and people who are hiding from the military in the US. They are not in our database but they are part of us.

How has this experience affected you?

I left Abu Ghraib in December and went back to the US. I am writing a book and one of the chapters deals with all the post-traumatic stress disorder we were going through and all the drinking and the escapism. Soldiers are in denial about what they have done. They needed an outlet to air their frustration, because a lot of people had to go back and they did not have the courage to jump the border into Canada or become conscientious objectors, which is the path that I took.

It is all nice and good to sympathise with the returning soldiers in the US, and we talk about this very often, but it bothers me all the time we spend talking about this when 26 million Iraqis are going through PTSD.

How do you think that the US government can get public opinion to sustain this war after it has been so clearly exposed that all the reasons to go into Iraq were fabricated?

The people that are in power in the US spent millions of dollars on other people who are trained in verbal argument and they are very persuasive. And the right is much more unified. They are simply doing a very good job in combination with all the economic interest that the media represents. Without independent media it is very difficult to get the word to people.

Certainly it will depend on who the candidate is. I voted for John Kerry in the last election because I was so angry at what Bush had done. But Kerry is also only a tool. He wanted to increase the Special Forces by 40%. He was just as indebted to economic interests that are making money out of the Iraq war right now. He would only be more diplomatic about it. He would have the same savvy that the European Union has right now, that behind closed doors supports certain things and then they come out and condemn particular actions.

What is your message to the people of Ireland?

To the people of Ireland - kick the US military out of Shannon. Irish neutrality is being stamped on and the atrocities that are happening in Iraq and Gaza are directly facilitated by what is happening. Economically speaking, Ireland's potential for freedom and prosperity is being halted by the degree the state has been made a lap-dog of the United States.

What is your view of what is happening right now in the Middle East?

I speak out of a feeling of penance because of what I have been part of.

At the very minimum you would desire for a principle of proportionality and perhaps an attitude of charity towards the Lebanese people who are not affiliated with Hizbollah. This is the bare minimum that should be involved and that obviously has not happened.