Huge crowds turn out to honour the Hunger Strikers 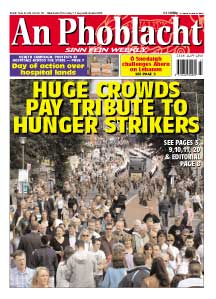 Over 20,000 people attended a major march and rally in Belfast on Sunday, 13 August to mark the 25th anniversary of the 1981 H-Block Hunger Strike, in which 10 republican prisoners died. The event also honoured Mayo republicans Michael Gaughan and Frank Stagg who died on hunger strike in England in 1974 and 1976 respectively.

Thousands more watched the march, headed by the Felons Pipe Band and people bearing portraits of the 12 Hunger Strikers, as it passed through West Belfast to Casement Park.

It was clear from the hundreds of colourful banners and flags on display that Republicans from every corner of Ireland and supporters from various countries around the world had turned out to honour the courage and self-sacrifice of the Hunger Strikers and to take part in a major celebration of their ideals.

The huge turnout, which featured imaginative street theatre and floats, was a testament to the esteem in which the Hunger Strikers are still held in Ireland and abroad.

Floats and displays portrayed various political issues related to the prison struggle including the notorious Castlereagh interrogation centre, the non-jury Diplock courts system, and the protest by women political prisoners in Armagh jail.

The anniversary event featured a large contingent of former republican Prisoners of War, some dressed in blankets in memory of the blanket protest, with many others dressed in white shirts and black ties. It was an important reminder of the thousands of republicans jailed for their opposition to British occupation and a mark of respect for their vital contribution to the struggle for freedom, justice and peace.

The rally at Casement Park, which was addressed by West Belfast MP and Sinn Féin President Gerry Adams (see pages 10/11), was co-chaired by Sinn Féin Chairperson and MEP for Dublin Mary Lou McDonald and former Mayor of Kerry Councillor Toiréasa Ferris. McDonald said that the Hunger Strikers of 1981 had destroyed Britain's attempt to criminalise the republican struggle. They had followed in a proud tradition of republican hunger strikers in previous decades. She said those attending the rally remembered the courage and the sacrifice of all of those who made the ultimate sacrifice for Irish freedom.

McDonald and Ferris both paid tribute to the families of the Hunger Strikers. The families had attended Hunger Strike commemorative events over the past six to seven months throughout Ireland and were given a warm welcome at the Casement Park rally.

As a symbol of the triumph of the spirit of the Hunger Strikers, and in a salute to their courage and sacrifice, 12 white doves were released.

Brendan 'Bik' McFarlane, O/C of republican prisoners in the H-Blocks during the 1981 Hunger Strike, performed A Song for Marcella, written by McFarlane in 1991 in the H-Blocks to mark the 10th Anniversary of the Hunger Strike. Marcella was the pen name Bobby Sands used when writing for An Phoblacht.

Jennifer McCann, a former republican POW in Armagh Jail and friend of Bobby Sands, spoke on behalf of the women political prisoners in Armagh in 1981. She said, "Men like Bobby Sands and women like Mairéad Farrell, who was on the first hunger strike in Armagh in 1980 and who was later murdered in Gibraltar, are the Che Guevaras of our struggle. They are an inspiration to people around the world in their struggle for freedom."

McCann thanked the many people on the outside who had been a source of support and inspiration to the women prisoners in Armagh.

Frances Black sang the song The Time Has Come, which she felt captured the moment when each of the Hunger Strikers said goodbye to their families, and followed this with the popular protest anthem Something Inside So Strong.

The large crowd at Casement was also entertained by Francie Brolly, who brought proceedings to a close with The H-Block Song.