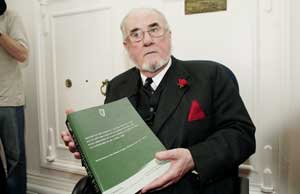 Judge feels the rough end of the Sindo boot

Last weekend's Sunday papers were filled naturally enough with coverage of the Barr Report on the shooting dead of Abbeylara man John Carthy.

The report was scathing in its assessment of senior management, and most of the papers discussed the implications of the report, how to implement its recommendations and the lessons that had to be learned.

Most, but not all. The Sunday Independent once again distinguished itself with a dishonest attempt to rubbish the Barr Report, a story penned by that fan of all things Blue, Jim Cusack.

Cusack has become a bit of a joke in journalistic circles, with his Sindo exclusives regularly derided for their inaccuracy and mendacity. But last Sunday's was a bit extreme even by Cusack's lack of standards.

It wasn't really surprising then that one significant part of the Barr Report was studiously ignored by the Sunday Independent. And that was the bit where the gutter rag was roundly condemned by the judge.

You may remember that in the aftermath of the Abbeylara siege, Gardaí were anxious to discredit the Carthy family, hoping thereby to divert attention from what they had done in unnecessarily shooting dead an innocent man. (That this is the case is exactly what the judge decided.)

The Sindo published two untrue stories in this regard. In the first, they claimed that John Carthy's sister, Marie, was not allowed to talk to John and try and calm him down because, Gardaí and the Sindo claimed, she was drunk. This slur was without foundation, but no apology has been forthcoming from the Sindo.

Then the Sindo claimed that John Carthy had been upset by a dispute about land - a claim guaranteed to alienate an urban readership for whom land disputes are the stuff of all that is old-fashioned and 'backward' about Ireland.

There was no truth whatsoever to this story, which was inspired by Garda "sources". Judge Barr pointed this out in his Report and roundly condemned the Sunday Independent for what it had done.

At least RTÉ reported the judge's similar condemnation of RTÉ's Five Seven Live report naming John Carthy during the siege; but the Sindo, true to its cowardly and dishonest character just ignored the comment and concentrated its ire on trying to rubbish the judge instead.

Republicans are well used to dishonesty and distortion from the Sunday Independent. But it's a mark of how aloof from the madding crowd the Sindo gang imagine themselves to be that even a judge gets the Sindo treatment when he forgets to toe the Tony O'Reilly line.

Whatever about Sinn Féin's electoral dominance, the SDLP regrettably remains the only fully constitutional voice of northern nationalism. So when Mark Durkan voices the fear that British proposals for community-based restorative justice schemes might not only undermine the quest for a lawful society but could actually result in state-paid vigilantism, every other constitutional party in these islands should pay close heed.

With these weighty words did The Irish Times editorialise on the issue of restorative justice, throwing the respectable weight of the Old Lady of D'Olier Street behind those who want to force northern nationalists to bow the knee to the hated RUC (or PSNI or whatever it calls itself now).

What The Irish Times ignored in its anxiety to score more points against Sinn Féin is that "community-based restorative justice schemes" are widespread throughout continental Europe, and that such schemes are operative in various parts of the 26 Counties and even in Britain.

Nowhere does The Irish Times make the slightest attempt to discuss why nationalists hate the RUC or what role that organisation plays in continuing repression against nationalists; and nowhere does The Irish Times point out the value of getting the community involved in the fight against anti-social and criminal behaviour in all parts of Ireland, but especially the North.

Instead, the "paper of record" contents itself with raising the spectre of 'paramilitary involvement' while ignoring what the community itself might want or might respond to.

Yet again we see how bile and bias distort the discussion of serious issues, and how the respectable press, when push comes to shove, act exactly as their gutter counterparts do, except that they use longer words.

Focal Scoir: Irish-language issues are uniformly ignored by the major press outlets in both parts of Ireland, with The Irish Times and RTÉ only deeming the issue worthy of coverage when they want to score some anti-Irish point or other.

No surprise then that the arrest of a teacher in Belfast who spoke Irish when confronted by the PSNI went unreported. Nor did the paper of record bother to report the picket placed on the court, nor the comments of MEP Bairbre de Brún.

It's what constitutes freedom of speech in the twisted minds of the West Brits of D'Olier Street.