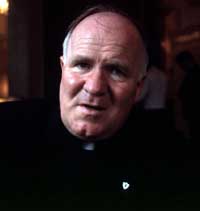 Some weeks ago I wrote an article about Charles Haughey for Daily Ireland. Haughey was a controversial figure in Irish politics. A complex character, it is difficult to sum up his impact on Irish politics and society. Certainly he prompted strong emotional responses from a variety of different perspectives.

A short time after his death an equally controversial and historical figure of the last four decades also died; Fr Denis Faul. The fact that it has taken An Phoblacht until now to commission a piece about Denis Faul perhaps shows the degree to which republicans are uncertain about how they should regard his role in history. For many republicans, he is seen solely as the person responsible for breaking the 1981 hunger strike. That is an over-simplification and would also be unfair to the legacy of Denis Faul who had a close involvement with republican affairs, and particularly with republican prisoners, that predated the hunger strikes.

In the late 1960s and early 1970s when journalists and academics, with the exception of a courageous few, ignored what was happening to the republican community - internment, in-depth interrogtion, mass arrests, brutality, conditions in the prisons - it was Denis Faul and two other priests, Fr Raymond Murray and Fr Brian Brady, who documented and exposed what was happening. They wrote letters to the papers, published pamphlets, and spoke to anyone who would listen. Researching that period you repeatedly come across their writings.

Denis Faul therefore came to the fore because few others, outside of those directly involved in the situation, were prepared to stand squarely on the issue of rights for the nationalist, Catholic community in the north. It was also an era when nationalists, denied proper political representation, looked to the Catholic Church for assistance and also a time when that church had a greater influence in Ireland.

By 1981 that situation had changed. The conflict had changed. The Republican Movement had also changed. Denis Faul opposed the use of hunger strike as a tactic. He thought it wouldn't work and that many people would die on it. To that degree he was totally in line with the thinking of the leadership of the Republican Movement. What differed, was how he then responded to the hunger strike. He set out to break it based on the argument that he would save lives.

At one level that can be regarded as a high moral and courageous act; at another, the height of arrogance. But it is not his opposition to the hunger strike that I have a difficulty with but the manner in which he went about his attempt to end it. He manipulated the grief of families and attempted to drive a wedge between them and the Republican Movement. Yet Denis Faul was more aware than most of the thinking of the prisoners having argued at length with Bobby Sands and Bik McFarlane.

The hunger strike was a watershed in Irish politics. It was that also for Denis Faul. He saw clearly at that point that the nationalist community had others who would speak on its behalf. The Church was being pushed aside, openly challenged, and losing its influence within the nationalist community. That frightened Denis Faul who at heart was an arch-conservative - politically, morally and theologically.

If his objective had been solely to end the hunger strike then Denis Faul would have been content when that end came. However, his comment in an interview at the time that he had, "broken the hunger strike in three months and would break the IRA in three weeks" gave a clear indication of how far his thinking had changed over the course of that year. A line had been drawn in the sand and his words and actions subsequently reflected that shift in his politics.

Ironically, his dying words were directed at Ian Paisley - not in terms of condemnation of Paisley's role in helping perpetuate the sectarian statelet that Denis Faul had so often criticised - but as the person best placed to carry forward his (Faul's) campaign on behalf of the relatives of those killed and buried by the IRA in the early 1970s. It would be the ultimate irony if Paisley was to use those words as yet another block to going into government with Sinn Féin. But then, maybe Denis Faul would have preferred republicans not to be in government if their politics did not give special recognition to the role of the Catholic Church. At the end of the day, it was the politics of that church that he was loyal to over and above everything else.