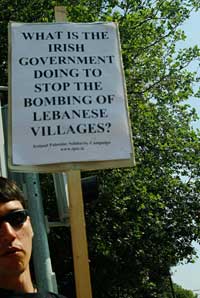 The killing of four UN observers in a compound whose location had been notified to the Israelis at least 10 times and which has been described as a deliberate act by UN Secretary General Kofi Annan, is yet another example of Israel's complete contempt for international law. Arising out of their equally illegal and immoral invasion of a sovereign country, Lebanon, the killings occurred on the same day that US Secretary of State, Condaleza Rice visited the region.

On the day she chose to visit the official death toll stood at 411 Lebanese and 42 Israelis.Flanked by Israeli Prime Minister, Ehud Olmert she voiced concern over the suffering of innocent people but significantly did not call for an immediate cease-fire. She said that any cease-fire must be enduring which many have interpreted as the complete defeat of Hizbollah. Perhaps conscious of her own country's invasion of Iraq under the banner of "the war on terror" she described the war as a battle of ideologies.

Many commentators see the Israelis using the capture of two of their soldiers as a pretext to blow Lebanon back to the Middle Ages - a comment made by an American General during the Vietnam war. A stable and prosperous Lebanon may not be to the liking of the current Israeli regime. Over 500,000 people have become refugees in Lebanon in the first two weeks of this war.

Opposition to these policies is rising throughout the world and in Ireland on July 24 more than 100 anti war demonstrators, including a Sinn Féin delegation, marched from the Central Bank to the Israeli Embassy in Ballsbridge. Victims of the Israeli aggression and villages that had been destroyed by the Israeli air force had their names prominently displayed in chalk on the pavement outside the Embassy. Protestors also lay on the ground covered in red stained sheets in what they called a die in. The very next day a jury acquitted five campaigners accused of damaging an American aircraft at Shannon. Sinn Féin International Affairs spokesperson, Aengus Ó Snodaigh TD, has welcomed the verdict saying "At all times Sinn Féin has maintained that the use of non-violent direct action as was carried out in Shannon Airport was a justified response to Irish complicity in the illegal occupation of Iraq and the use of Irish facilities as a pit stop for US warplanes."

• A major rally is being planned for this Saturday 29 July organised by the Irish Palestinian Solidarity Campaign and the Irish Anti War Movement. They are calling for a mass turnout to show the Irish people's opposition to this brutal war of aggression on Lebanon. People are asked to assemble at the Garden of Remembrance at 2.00pm. A prominent Sinn Féin represetnative will be among the speakers.