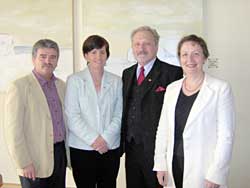 The European Court of Justice has ruled that the 26 Counties breached EU law by taking Britain before a United Nations tribunal in relation to the Sellafield nuclear plant.

The Irish Government took an action under the UN Convention on the Law of the Sea in 2001 in an effort to have the controversial plant closed. The body later issued recommendations to resolve the dispute, but the European Commission took the Irish Government to court, claiming it had breached EU law by turning to an outside body. The Court of Justice upheld this stance last Tuesday.

Sinn Féin Environment Spokesperson Arthur Morgan TD described the ruling as deeply disappointing, but not unexpected. "Unfortunately this decision represents a set back in terms of the ongoing campaign to bring about the closure of Sellafield. This decision cannot be allowed to put off track the campaign to close Sellafield which continues to pose an intolerable risk to the health of the people of Ireland. Sinn Féin is calling on the Irish Government to proceed as quickly as possible with a case to ECJ. We are strongly urging the Irish Government to work with the Nordic countries in a united campaign that would embrace legal, diplomatic, political and popular pressure on Britain to shut Sellafield and to stop the proposed further nuclear plants', he said.

The European Court decision follows a well attended conference in Dundalk entitled Sellafield- Still a Danger on Saturday, 20 May where Sinn Féin Louth County Councillor Tomás Sharkey said the Irish Sea is the most radioactive in the world and that with it's disgraceful safety record Sellafield must close.

Other speakers included Lennard Varmby from the Swedish Energy Agency who spoke of the alternative forms of energy being exploited successfully in Sweden and Dundee Labour Councillor George Regan representing Nuclear Free Local Authorities, who said he was ashamed of Tony Blair and the direction he was taking on the issue of nuclear power, adding that the clean-up cost of existing and retired nuclear institutions is in excess of £56 billion sterling.

Rae Street, from CND Britain said no safe solution had yet been devised to store nuclear waste and pointed to the evidence of cancer clusters linked to nuclear power production. "Building new nuclear power stations would increase the most high level toxic waste five fold", she said.

The conference was also addressed by Sinn Féin South Down MLA Caitriona Ruane, and by Sinn Féin MEP Bairbre De Brún who said she and fellow Sinn Féin MEP Mary Lou McDonald would be raising the issue at every opportunity in the EU Parliament and working with others throughout Europe to campaign for the closure of existing nuclear plants and against the growing pro-nuclear lobby.