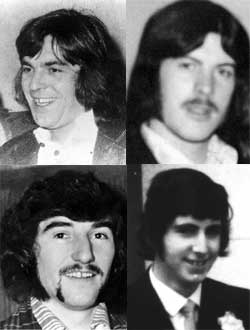 During the month of May 1981 four more republican prisoners joined the historic H-Block Hunger Strike as replacements for Bobby Sands, Francis Hughes, Raymond McCreesh and Patsy O'Hara. During the course of the strike, each of the four men were to stand as anti H-Block candidates in the 26 County General Election of June 1981. Joe McDonnell in the constituency of Sligo/Leitrim, Kieran Doherty in Cavan/Monaghan, Kevin Lynch in Waterford and Martin Hurson in Longford/ Westmeath.

The fourth man to join the 1981 Hunger Strike was Joe McDonnell, a 30-year-old married man with two children, from Lenadoon in West Belfast. A close friend of Bobby Sands, he was captured with him and replaced him on the Hunger Strike.

Joe and his wife Gorretti, whilst living with Goretti's sister, were forced out of their Lennadoon home in 1970 by loyalists as the British army looked on. In 1972 McDonnell was badly beaten by the British army and subsequently interned, first on the Maidstone prison ship and later in Long kesh.

On his release several months later McDonnell immediately joined the IRA and was active in the Andersonstown area. His spell of freedom was short though and he was again interned in 1973.

In October 1976 he was sentenced to 14 years in jail for IRA activities. He refused to put on the prison uniform.

Belfast IRA Volunteer, 25-year-old Kieran Doherty joined the Hunger Strike on 22 May, as a replacement for Raymond McCreesh. He had spent seven of the previous ten years imprisoned. In 1980 he was amongst those 30 prisoners who went on hunger strike for four days prior to the ending of the original strike.

Kieran was born on 16 October, 1955 in Andersonstown. His father Alfie had an uncle, Ned Maguire, who took part in the famous IRA roof-top escape from Belfast's Crumlin Road jail in 1943. His son also Ned, was an internee in Cage Five of Long Kesh in 1974, when he took part in the mass escape from the camp during which Hugh Coney was shot dead by the British army. Ned's sisters (and Kieran's second cousins), Dorothy Maguire, aged 19, and Maura Meehan, aged 30, were shot dead by the British army on 23 October, 1971.

Another relative of Doherty's, his uncle Gerry Fox, was part of the famous Crumlin Road jail 'football team', who escaped from the jail by climbing over the wall in 1972.

Kieran himself had never displayed much of an interest in politics until internment. He joined Fianna Eireann in the autumn of 1971. On 6 October, 1972, the British army came to arrest Kieran, despite his father's objection that Kieran was under 17. His father eventually got him released after waking up the sexton of St. Agnes' chapel and obtaining Kieran's birth certificate.

When tried again Doherty managed to escape across the border, only to make his way back to Belfast at the beginning of 1973. A week or so later, he was arrested and interned in Long Kesh. He was among the last internees released in 1975. He immediately reported back to the IRA. He had many narrow escapes before his capture in August 1976. He was charged with possession of firearms and explosives and commandeering the car and received 18 years.

Kieran joined the blanket protest immediately. He was constantly in conflict with the warders.

Kevin Lynch who replaced Patsy O'Hara, was born on 25 May, 1956 and lived in the small village of Park just outside Dungiven. A keen GAA enthusiast. He witnessed at first hand, crown forces brutality and joined the local stcky controlled Fianna Eireann. Later became involved with an independent active service unit until he emigrated to England in 1973. Upon his return in he joined the INLA around August 1976. Arrested in November of that year he was jailed for ten years. He suffered much brutality at the hands of the warders but was steadfast in his opposition to criminalisation.

No one was surprised by his decision to go on Hunger Strike which he did on 23 May.

Martin Hurson was born on 12 September 1956, in the townland of Aughnaskea, Cappagh, near Dungannon. He was part of a very close and good humoured family. Described as a quiet, religious, and easy-going young man, he nevertheless, before his arrest, enjoyed social pursuits such as dancing and going to the cinema. He enjoyed the company of other people, among whom he had a well earned reputation for being a practical joker and a bit of a comedian.

Martin was arrested an dtaken to Omagh RUC barracks on 11 November 1976, He was badly, and professionally tortured in Omagh for two days. He was beaten about the head, back and testicles, spread-eagled against a wall and across a table, slapped, punched and kicked. He was eventually forced to give an incriminating statement.

In November 1977, aided by perjured RUC evidence and totally ignoring clear evidence of torture, a Diplock court sentenced him to 20 years. He went straight on the blanket and joined the Hunger Strike on 29 May replacing Brendan McLoughlin who had to come off the strike due to a perforated ulcer.

Republicans from all over Ireland travelled to Lanesboro, County Longford on Sunday last to commemorate the unveiling of a monument to 1981 Longford Westmeath candidate and Hunger Strike martyr Martin Hurson. A crowd of several hundred people watched on as cumainn from the four provinces joined the march through the town.

Brendan Hurson brother of the late Hunger Striker, unveiled the monument. Also attending were Martin Hurson's girlfriend at the time of his death, Geraldine Donnelly as well as Dermott Boyle and Kevin O'Brien who were arrested under Section 10 of the emergency Provision Act at the same time as Martin Hurson.