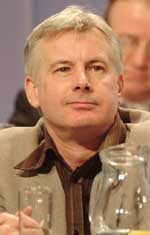 Recognising the utter failure of the Irish Government to grasp the reality of the drugs crisis in the 26 Counties, Sinn Féin used its Private Members Time in the Dáil last week to highlight the extent of the problem and to offer an effective way forward.

The party put forward a comprehensive motion dealing with all aspects of drug misuse from the devastating effects of heroin use to the escalating use of cocaine and the emergence of crack cocaine in Dublin. Community Affairs spokesperson Seán Crowe said he believed, if endorsed, the motion would have provided "the basis for seriously tackling the growing problem of drug misuse that affects all sectors of Irish society."

Opening the debate on Tuesday Crowe, parts of whose Dublin South West constituency have suffered greatly over the past few decades from the affects of drug addiction, said he had been to too many wake-houses and funerals to stand by and wait for the Government to wake up and take note of the gravity of the problem. He said there was an urgent need to act now across a range of Departments but that the problem can only be seriously tackled "if we first admit to its scale" which he described as being "of epidemic proportions."

Graphically outlining the horrific murder of the daughter of a friend by her drug addicted brother Aengus Ó Snodaigh TD warned this was the "reality behind heroin addiction if we fail to take decisive action to tackle the problem of drugs."

Ó Snodaigh criticised the practice of Gardaí turning a blind eye to small-scale drug dealers in exchange for information. "These are the same drug dealers who threaten neighbours and shoot competitors, bad debtors or anyone who attempts to cross them", he said. While the large drug barons needed to be tackled head on, there was also a need to ensure a parallel operation against the smaller drug dealers, who would potentially replace them.

The Sinn Féin motion was supported by the Labour Party, Greens and some Independents. Sinn Féin Dáil leader Caoimhghín Ó Caolaín TD criticised a Fine Gael amendment saying it was "puzzling" and that he suspected the party did not wish to have to say they supported a Sinn Féin motion. The amended motion was only a truncated version of the original.

A Government amendment failed to deal with the core issues and although Government backbenchers Charlie O'Connor, John McGuinness and John Curran all admitted serious problems in their respective constituencies and O'Connor complimented Sinn Féin for proposing the motion, they towed the party line when it came to a vote.

In his contribution Caoimhghn Ó Caoláin described the response from Minister Noel Ahern as "the typical knee-jerk self-congratulatory amendment that seeks to bury, by weight of numbers on the Government benches, the truth from full public gaze." "Shame on him" he continued. He accused the Government of being "defensive in the extreme" in the amendment they put forward saying "It is depressing that there is no recognition in the amendment, nor in the speech of the Minister of State last night, of the continuing impact of the drugs scourge on real people, real families and real communities.

"The Sinn Féin motion does not condemn the Government as such motions customarily do. It offers a clear analysis of the problem and presents proposed actions. It deserved a better response than this amendment and Minister of State Noel Ahern's speech."

Describing the drug problem as "a multi-faceted problem requiring a multi-faceted response" Ó Caoláin called on the Government to dedicate "adequate funding to significantly expand the availability of drug-user treatment and to eliminate waiting lists for treatment." He also called for the empowering of communities arguing that the "knowledge and experience of communities" built up since the 1980s "must be harnessed".

In the end the Government amendment was only passed by seven votes and having listened to all the contributions over two nights of debate Caoimhghín Ó Caoláin said it is obvious that "there is much common ground in the Dáil and among statutory agencies, those working at the coalface, including community and voluntary bodies, communities and drug users themselves about how we can move forward. Commitment and drive will be needed and, to that end, I suggest we all strive together."