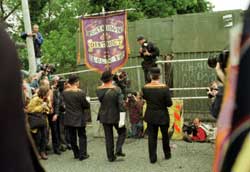 The High Court in Belfast has ruled in favour of the Garvaghy Road residents in their judicial review concerning the appointment of two Orangemen to the Parades Commission.

The court ruled that the appointment of the two Orangemen had failed to meet the requirement that the commission represented both sides of the community. Judge Morgan said he found the appointment panel's failure to recognise a potential conflict of interest "inexplicable".

Last week David MacKay resigned after it was revealed that the panel had never taken up references offered by MacKay on his application. It also emerged that MacKay had not sought permission from the referees he cited and that some were unhappy to provide a reference. MacKay had used Dolores Kelly, an SDLP MLA as a referee when applying for the post without her knowledge. David Burrows, the second Orangeman appointed to the commission lost his post when the court ruled his appointment had been illegal.

Sinn Féin MLA John O'Dowd said the British direct Ruler's arrogant approach had undermined public confidence in the Parades Commission. "The High Court ruled that Peter Hain, in his haste to appoint members of the Orange Order to the Parades Commission, ignored the basic procedures which need to be followed in relation to appointments to public bodies. This judgement is a damning indictment on Peter Hain's management of this issue," said O Dowd.

And Hain's judgement came under further scrutiny after another court hearing ruled that he may have acted with "improper motive" when appointing an RUC widow as the new Victims' Commissioner.

Presiding Judges Campbell, Kerr and Nicholson found that Peter Hain "did not have the legal authority" to appoint Bertha McDougall. Hain had failed to "have regard to the criteria that the appointment should command cross community support" said the ruling.

After the appointment it emerged that Hain had consulted with the DUP's Jeffery Donaldson but had failed to seek the views of any other political party.

Commenting, Sinn Féin's Philip McGuigan said the British Secretary of State had shown utter contempt for the appointments process. "The appointment of McDougall was a sop to the DUP," he said.

More than 1,000 mourners attended the funeral of the 15-year-old schoolboy Michael McIlveen who was murdered by a sectarian gang. In Celtic and Rangers shirts, side-by-side carrying the coffin, the youth of Ballymena demonstrated their vision of unity and peace between Orange and Green.

But sadly, this profoundly moving gesture by local young people, was not matched by the response of many of their civic representatives. The tone had been set by DUP claims that the killing was not sectarian, a lie perpetuated by Ian Paisley even on the day of the funeral. Speaking in the British House of Commons the DUP leader claimed that there was a Catholic member of the gang who had brutally attacked the schoolboy.

Meanwhile Ian Paisley jnr sought to undermine any burgeoning community solidarity by drumming up totally spurious fears that Protestant schoolchildren might be targeted in reprisal. He told the media of parents' concern "that a Protestant child will be killed" and called on nationalist public representatives to use their influence to reduce abuse and intimidation.

The PSNI accepted the killing had been sectarian but claimed it had been part of a 'tit-for-tat' campaign of sectarian violence in the town. But it was a claim the PSNI refused to back by statistical evidence.

Nationalists believe the statistics would reveal an overwhelming majority of Catholic victims and scupper any notion that sectarianism in the DUP stronghold was of a so-called 'tit-for-tat' nature. Refusing to reveal the statistics the PSNI claimed their computer software rendered it "not possible to provide analysis of the victims of sectarian incidents".

Sinn Féin Councillor Monica Digney said she wasn't surprised to learn that the PSNI were reluctant to reveal the nature of sectarian attacks in Ballymena. "I'm not surprised, especially when you consider some of the comments made by the PSNI in relation to the killing of Michael McIlveen," said Digney.

"The strategies of denial by the civic and political leadership within the town are providing political cover for the perpetrators of vicious anti-Catholic violence in Ballymena," she said.

Instead of being shamed into silence and obscurity, the perpetrators of sectarian violence responded by attacking mourners attending the McIlveen funeral. Mourners had their cars attacked as they travelled to the cemetery for the burial. Cars were stoned as they travelled through the Ballykeel estate on the way to Crebilly graveyard. One frightened woman said she thought she was about to be murdered when her car was surrounded by a crowd of unionist gang. "They were banging the windows and calling me a Fenian bastard. There were kids in the car dressed in Celtic tops and they were called all the names under the sun. If they had managed to open the car door we would have been beaten to death just like Michael," she said.