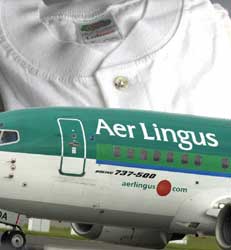 With crisis at Aer Lingus, the closure of Fruit of the Loom in Donegal and a new €175 million venture capital fund unveiled in the same the seven days, the detail of Fianna Fáil's business enterprise policy has been finally revealed. It's a case of some money for 3% of Irish businesses, no money for most of the rest especially if you are outside Dublin and no money yet if your enterprise happens to be a national asset in need of investment.

In the same week that Bertie Ahern accused some of Aer Lingus' former management including CEO Willie Walsh of trying to "steal" the company and that the government were "off the pitch" and it was up to the "experts and advisors now to get the company to the market", Fruit of the Loom finally closed its doors in Buncrana and Enterprise minister Micheal Martin unveiled a €175 million venture capital fund for what he called "high potential" start up firms.

It is now clear that there is no consistency when it comes to developing business. Aer Lingus has needed a long term investment strategy since 2001, when in the aftermath of 9/11 the global airline industry went into a period of massive restructuring. Coalition government refusal to keep Aer Lingus in public ownership and invest in it on a commercial basis, allowed under current EU rules, has impeded the firm's development.

Now privatisation with stock market flotation is looking increasingly difficult because of the unpredictability of oil prices and the lost revenue to international airlines forced to absorb price rises without increasing ticket prices.

The day after Ahern's stealing assets outburst, Fruit of the Loom in Donegal closed its doors, and Padraig MacLochlainn, Sinn Féin councillor and current mayor of Buncrana, told An Phoblacht that employment and enterprise development had been going backward in the county since 1998. He said, "It didn't take an economic genius to know that textiles were going to face tough times" and that "We really have in every sense of the word a jobs crisis in Donegal".

Together with the other three Donegal Sinn Féin councillors and with cross party support MacLochlainn has been part of developing an integrated regional enterprise strategy that would include Derry and West Tyrone. He told An Phoblacht that small businesses had been ignored by "a political establishment looking for big wins" and that this attitude was hampering enterprise in the area.

This week Micheal Martin launched his €175 million enterprise development fund, but this money is only on offer to businesses in the new bio and nano-technology sectors. Last week, he launched a Small Business Forum report that found 97% of all 26-County businesses have less than 50 workers but employ over 800,000 people. Martin said that it was "obviously important" that "we ensure we are doing as much as possible at all times to support their continued growth and development".

Days later the minister has forgotten his promise because all the recent entrepreneurship studies have highlighted lack of finance as the key issue for small and new businesses. So there is still no money for Aer Lingus or small business in not just Donegal but anywhere in Ireland.

Finally former Aer Lingus chief executive Willie Walsh announced £620 million profits, up 21% and a £48 million bonus for workers at his new charge, British Airways, this week. Wonder what Bertie thought of that?