"The Hunger Strike will never, ever leave me" 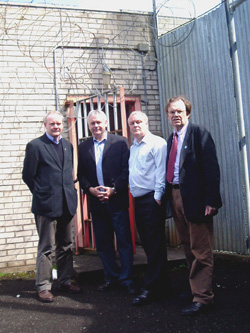 Brendan 'Bik' McFarlane was Officer Commanding (O/C) the H-Block prisoners during the 1981 Hunger Strike. Last Friday, 5 May, on the 25th anniversary of the death of Bobby Sands, McFarlane spoke to An Phoblacht's ELLA O'DWYER about the journey that brought him to undertake one of the most difficult challenges ever faced by an Irish republican.

A noticeable feature of Brendan McFarlane's personality is the comprehensive way in which he looks at things. Observant and lateral thinking, he sees the bigger picture. In terms of awareness, he has an edge. This awareness carried him through his prison sentence and, no doubt, impacted on his selection as O/C during the 1981 Hunger Strike.

Following a group visit to the hospital wing in the H-Blocks on the morning of the 25th anniversary of Bobby Sands' death, I asked Bik McFarlane about his recollection of the Hunger Strike. Conscious of the pain that was likely to be involved in being repeatedly questioned about this time, I wondered how he coped. "Sometimes it's fine, if for instance you're talking with other republicans", he said. "Other times you get choked up, angry or emotionally charged. The Hunger Strike will never, ever leave me".

As our group walked around each of the Hunger Strikers' cells in the Blocks that morning, I noticed something that illustrated those emotionally charged moments, while also indicating McFarlane's keen awareness. Each of the Hunger Striker's cell had a window and in one cell Bik picked up the bed, rearranging its position. "It wasn't facing that direction" he said. "It was facing this way", to which Jim Gibney responded: "Yes you're right, we would have been trying to keep the sun out of his eyes".

Born in 1951, Brendan McFarlane was raised in the Ardoyne area of Belfast and from an early age had a thirst for knowledge. Between 1968 and 1970 he studied at St David's Catholic seminary in Wales. The desire to learn followed him throughout his life, particularly during his period of imprisonment where with like-minded people, he engaged in ideological discussion and debate.

While theological studies might seem to be an unlikely pursuit for someone who later became involved in armed struggle, Bik saw no contradiction: "We were studying liberation theology. I'd have turned up somewhere like South America with a bible, in one hand and an AK47 in the other.

As it turned out, he decided to return to Belfast at a time when loyalist attacks agsinst the nationalist community were rife. Then came internment and the British army. Bik took regular holidays from college to Ireland. "After one holiday I went back toSt David's, but it wasn't the same. Something twigged." Two years into his studies, Bik came home and got involved in armed struggle.

At the time the IRA were in defensive mode. "There were loyalist attacks in Derry and Belfast, houses were burnt and riots were the norm. Internment was introduced and the Brits arrived". The Shankill Butchers were at work and loyalists were kidnapping, torturing and killing Catholics. The IRA soon moved to the offensive, hoping to "physically drive the Brits out.

"Things moved at a pace, but there was a lack of real political analysis. Sinn Féiners were treated rather badly. They were illegal until 1974. They were the poor relation, but doing crucial work. During those early days, the political took second place to the military. Some Volunteers thought that if you were in Sinn Féin you didn't have the balls". However, like a lot of other forward thinking people he "didn't like that".

Like many republicans, Bik found himself in a prison cell. "I went to jail at 23, I was an old man by then". Like his comrades, Mc Farlane was an ordinary person living in extraordinary times. Arrested and sentenced to life in prison, he arrived at Cage 11 where he met Gerry Adams, Brendan 'the Dark' Hughes and others.

There was a lot of study, discussion and debate going on at the time but Bik's initial focus was on escape. On his first night in the cages he discovered, to his delight, that a tunnel was already in place right under his feet. This escape was not to happen and so he ended up spending more time in the company of like-minded people in Cage 11, all engrossed in the pursuit of knowledge. "I found cage 11 to be a really, really important time. I learned more politics in Cage 11 than I learned in the entire of my previous life".

Censorship was rife in the Cages. "We had to smuggle in the likes of Kitson's writings. This was military stuff. We weren't allowed The War of the Flea". So the prisoners smuggled that in too. "You could get Harold Robbins and all the filth of the day. You could poison your mind, but you were not allowed to revolutionise your mind". Bik, Gerry Adams and others, worked out for themselves what the British policy of criminalisation was about, an awareness that served McFarlane well when he ended up in the Blocks.

Bik ended up 'on the boards'; the punishment cells of the H-Blocks when he and committed escapist Larry Marley, were caught in an escape attempt. "The first blanket man I saw was Pádraig Wilson. He was in a cell opposite me with nothing but a blanket. I was wearing my own clothes, had parcels and papers. It was a matter of dates- if you were arrested before a given date you had status, if arrested afterwards you were dealt with as a criminal."

Arriving at the protesting wing of the blocks was a claustrophobic nightmare. "The first two weeks in the blocks were depressing. I had to forget about escapes and the cages and knuckle down to the protest". But from his previous period in the Cages and his own ability to see the bigger picture, he had long ago figured out what was going on in terms of Britain's policy on Ireland. The British government aimed to criminalise the struggle and the prisoners seemed like the obvious targets.

"We had to fight or surrender". Surrender was not on the agenda for republicans. To the British, the prisoners were the soft targets. They were in for a surprise.

"Nobody had decided on a strategy for dealing with the protest", said Bik. But then republicans do what republicans do. "When the Brits threw down the challenge we accepted the challenge". They chose the battlefield and the prisoners responded." Kieran Nugent refused to wear a uniform and the rest is history.

By the time it came to the hunger strike republican prisoners were significantly politicised. "Prisoners were thrown to the forefront of the struggle", so they continued to analyse, discuss and look at where they were going". By the late 1970s the prospect of hunger strike seemed inevitable. The protest escalated and The Relatives' Action Committee was established, consisting mainly of mothers, wives, girlfriends and family members. The Pope's visit in 1979 seemed a likely opportunity. But the time wasn't right. Later other support groups developed like the H-Block/Armagh Committee.

In 1980 the time was right. At the end of the 1980 hunger strike when the POWs realised that another strike would take place, Bobby Sands stood down from his role as O/C in order to take part. Replacement was essential, both in terms of Bobby's position as hunger striker and his role as O/C.

As Vice O/C Seanna Walsh was the obvious candidate. Bobby had other ideas. He targeted McFarlane for the job saying: "Seanna Walsh is my best mate. When a crisis develops Seanna Walsh will not let me die. You will. You have to". It was a dubious compliment for Bik.

The idea of replacement hunger striker was a major consideration for Sands and he asked Bik: "Do you have your head around this? You better know what you're doing. Do you have a replacement for me?". A bit taken aback Bik answered: "Yes I have, its Joe Mc Donnell". "That's a good choice" replied Sands, "Joe is a solid man. He won't let you down.'

On his role as O/C during the Hunger Strike McFarlane says: "I wouldn't want to see anyone in that position. I didn't want the job. I might have to make the call if a potential deal came through from the Brits. But the pressure and heartache I felt paled into insignificance when you looked at the suffering of the Hunger Strikers and their families. I steeled myself to do the necessary".

Currently people are writing their own versions of history, not least Richard O'Rawe who recently asserted that the offer of a deal from the British Government was put on the table. According to O'Rawe, a conversation was held in Irish between Bik and another republican through the cell windows. O'Rawe claims that Bik suggested to another comrade that it was a deal that should be accepted. O'Rawe's claim is a "total and absolute fiction", says McFarlane."There was no such deal". According to McFarlane, the IRA prisoners were well prepared for false promises and the British clearly had no interest in a just resolution to the Hunger Strike.

Looking back again on the visit to the jail that morning, McFarlane referred to something Martin McGuinness had said in an interview when he asked what influence Margaret Thatcher exerted today compared to the long standing influence of Bobby Sands.

On the morning spent in the hospital wing of Long kesh, he said; "This morning was very dignified, very emotional. Another hunger striker Sheila Darragh, was there". One striking feature of the Hunger Strike is that, after a quarter of a century, its impact is stil felt. The events of that time projected onto the course of the struggle in a profound way, much as 1916 did. As Bik said, "the hunger strikers in the Blocks play as much of a role today as they did a quarter of a century ago. They are still part and parcel of the struggle". And, as he stressed, so do the protesting women hunger strikers of Armagh.

Chatting in the kitchen of his Belfast office last Friday afternoon I asked Bik about his dreams before he got involved in Republicanism. "I wanted to be a musician", he said. " I went out last night and heard a musician play and I'm not a musician". Brendan/Bik Mc Farlane is no Mozart, but he has his own strengths. Asked what he thought of Bobby Sands he said: "He was of the strongest people I ever met". When you look at Bik's ability to 'twig', Bobby's choice of replacement O/C in 1981 makes a lot of sense.