Adams sets out approach to Assembly 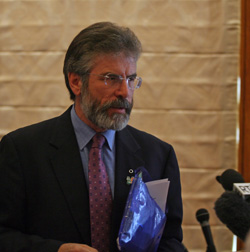 Speaking in Stormont on Wednseday the Sinn Féin President said it was an emotional week for Irish republicans. "Last Friday we marked the 25th anniversary of the death of Bobby Sands. This Friday is the anniversary of Francie Hughes. Their deaths and almost 50 others came during an immensely challenging period in our history. As we remember that time and celebrate the lives of these brave men we should also reflect on the hunger strikers commitment to the future. That is essentially what the hunger strike was about. That is also what we are about."

He said people should be under any illusions about the challenges and risks facing the British and Irish governments and all of the parties in the period ahead. Although the situation today bore little resemblance to that of 25 years ago, there were still difficulties to be overcome. Adams said that not least of these was the sectarianism which manifested itself in its most brutal form last weekend with the murder of 15-year-old Michael McIlveen. "Let us be clear and honest about this. Sectarianism is rampant in this society. It needs to be eradicated. The peace process is consequently the most important issue facing the people of this island today", Adams said.

The Good Friday Agreement was central to the stabilityof the process. "Progress within the peace process will create opportunity, wealth, improve our standard of living and contribute to further progress. It will usher in equality and remove the causes of sectarianism. Failure will set all this back by decades."

Adams said it was important that everyone understand that the Assembly to be convened by Peter hain on Monday, was not the Assembly envisaged in the Good Friday Agreement. "This is an inferior model designed by Mr. Hain. This is the Peter Hain Assembly. While Sinn Féin understood the strategy of the two governments and the positives involved the party was clear about its shortcomings.

British legislation provides for an Assembly period between May 15 and the end of June in which to form an Executive. If that does not happen, a further period after the summer recess has been set ending on 25 November.

Adams said that although the two governments say the purpose is the appointment of the Executive, the legislation authorises the British Secretary of State to allow other business to be conducted. Assembly rules have also been changed. "Sinn Féin will not acquiesce to this. Our singular focus will be on the formation of the Executive. We will use our mandate for this purpose and to prevent either the governments or any party here from diverting proceedings into time wasting distractions", said Adams.

There is scpetiscism about Ian Paisley's willlingness to do business and high hopes invested in the Assembly after the Good Friday Agreement years ago have been eroded. But despite this Adams detected optimism that progress could be made. "The significant moves by republicans last year emboldened many to hope that this time it will be different - that this time real progress can be made." There was also a feeling that the economy needed local politicians to take charge. "If a focus could be kept on the formation of the Executive and away from other distractions progress is possible", said Adams.

Sinn Fein has ruled out participation in any Shadow Assembly. On recent moves by the DUP to put forward assembly arrangements overiding the Agreement safeguards Adams said made clear in meetings with the Taoiseach and Tony Blair, that this was unacceptable.

Adams said it was worth noting that any initiatives had come from the British government, mostly at the behest of Sinn Féin. In March Peter Hain put forward a proposition that would have excluded Sinn Fein from negotiations. Although he didn't push the issue and Sinn Féin blocked it, what was significant was that Hain was "supported by the Minister for Foreign Affairs Dermot Ahern. So for all these reasons there is a need for great vigilance in the time ahead."

Adams said the Sinn Fein leadership had thoroughly examined the current situation and its potential pitfalls. "After a thorough discussion we have agreed very strict guidelines and conditions for our party's participation in the Peter Hain Assembly. Consequently our focus will be on the restoration of the institutions. So, I intend to nominate The Reverend Ian Paisley and Martin McGuinness for the positions of First and Deputy First Ministers. If this is unsuccessful we will seek to return to this business at the earliest possible time', Adams said.

Sinn Féin would also participate in a Business Committee to ensure that the election of the First and Deputy First Minster, and any business for the urgent preparation of the restoration of government is discussed by the Assembly.

Adams pointed out that it has been suggested that the Hain Assembly would provide opportunity for discussion of important social and economic issues but this would be pointless as the proposed Assembly is powerless on such issues and would be nothing more than a talking shop. The way to tackle such matters depended on local politicians taking up their responsibilities.

"We have an opportunity to send British Ministers home and for local politicians, who know the issues, to take responsibility for deciding the future direction of Health and Education, the Environment, Policing and Justice and much more", he said.

The chances for success were too eartly to tell but Sinn Féin was there to do business and determined to rise to the needs of the situation. "I have no doubt that the DUP will enter into power sharing arrangements. But for understandable reasons they want to do so on their terms. That is not possible unless the Good Friday Agreement is torn up. The objective therefore has to be to get Ian Paisley into the power sharing arrangements on the terms contained in the Agreement. Until this is achieved the Assembly should have no other role", Adams said.

While Sinn Fein is deeply opposed to the polices of the DUP it recognises its mandate and the right of its leader to be First Minster under the terms of the Agreement.

The DUP wants the Assembly to stay away from the formation of the Executiv and for a shadow forum to exist, including shadow committees. Adams made clear that Sinn Fein w not permit this.

"That's the politics of the peace process. Sinn Féin's resolve is to make these politics work. If politicians fail or refuse to do this, then they cannot with credibility condemn the politics of sectarianism or sectarian killings like that of Michael McIlveen. Like it or not we are the role models. Our duty is to lead by example", he said.