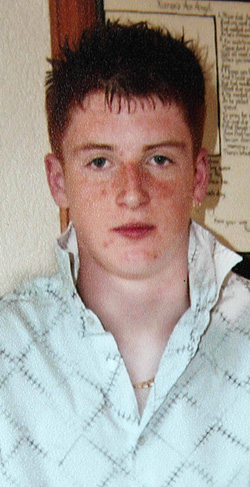 Following the horrific sectarian murder of 15-year-old Michael McIlveen in Ballymena, Sinn Féin's Philip McGuigan has called on the DUP to state publicly that Catholics and nationalists are equal citizens and in line with the Good Friday Agreement entitled to live free from sectarian harassment and violence. "It's simply not enough to condemn sectarian violence when it occurs while maintaining the political and social context within which sectarianism takes place," said the North Antrim MLA.

Michael McIlveen died in hospital less than two days after he had been a victim of a brutal sectarian attack in Ballymena. A pupil of St Patrick's College, Michael had remained in a critical condition after he was savagely beaten by a unionist mob in the early hours of Sunday night.

The killing is the culmination of a series of sectarian attacks against Catholics and nationalists in the greater Ballymena area including paint, petrol and pipe bomb attacks on Catholic homes, schools and churches. Last summer nationalist families in the North Antrim village of Ahoghill were intimidated out of their homes after sustained targeting by unionist mobs.

"For the last year we have been predicting ongoing sectarian violence would eventually lead to a tragedy such as this. Ian Paisley and the DUP need to send out a signal that the Catholic, nationalist and republican people who live in Ballymena are equal citizens," said McGuigan.

Described as unassuming and a "nice lad" Michael McIlveen and a companion had been confronted by a gang of around a dozen unionists, at least one of which was armed with a baseball bat, minutes after leaving a takeaway pizza outlet in the town. The victim was then chased by the gang for almost a mile before being cornered in an alleyway in Garfield Place. The fatal attack took place in nearby Garfield Drive. During the brutal assault the teenager was beaten with a baseball bat until he fell to the ground and then members of the gang took turns to jump on his head.

Despite horrific injuries Michael McIlveen managed to make his way home. Although his speech was already slurred the boy was able to describe the attack to his parents before being rushed to Antrim Hospital. His condition deteriorated rapidly and he was placed on a life support machine where he remained critical until his death on Sunday evening.

The citadel of sectarianism that is Ballymean is the political heartland of the DUP and that party and its leader have been closely associated with vrulent sectarianism in the area for decades. Three young children, members of the Quinn family were burned alive in a unionist petrol bomb attack on a house in Ballymoney in the early hours of the Twelfth was preceded by DUP leader Ian Paisley whipping up 'support' for Orangemen in Drumcree.

The DUP's response to the murder of Michael McIlveen is similar to that of the Quinn children. Standing outside the charred remains of the Quinn family's home in July 1998, Paisley claimed the deaths were not sectarian. This time it was left to Ian Paisley jnr to not to "jump to conclusions," by saying that McIlveen's murder was sectarian.

Following a pattern that has become familiar to nationalists, coverage of Michael McIlveen's murder has been accompanied by intial denial of the obvious sectarian motive to 'tit-for-tat' explanations and the notion of "rival gangs". When Ballymena PSNI Superintendent Terry Shevlin was forced to concede the killing was sectarian, he attempted to set such a context by saying there had been "sectarian undertones in the town for some time between rival groups of young people". The superintendent's comment is an insult in the context of what really happened. Michael McIlveen was returning home with a friend when he was confronted, chased and cornered by an armed unionist mob that had been on the prowl for a vulnerable Catholic victim.

Meanwhile the DUP have been citing the existence of a handful of Tricolours within a largely nationalist housing estate, the fact that republicans held a small local march in Ballymena last year and have commemorated the 25th Anniversary of the 1981 Hunger Strikes with a few posters, as "republican provocation" that is somehow sufficient to explain the brutal slaying of a Catholic schoolboy.

"I hear Ian Paisley condemning the murder of Michael McIlveen and then go on to provide justification, whether its about flags, posters or commemorations. There are no excuses for beating a 15-year-old school boy to death," said Philip McGuigan.