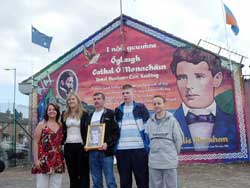 Charlie Monahan, from Ballymacarret in East Belfast, was the first Volunteer from Ulster to die on active service in 1916. His name is the first name on the B company Roll of Honour which is sited in the Short Strand, East Belfast and it was in the small nationalist area on Sunday, 23 April that up to 1,000 republicans marched to commemorate Monahan.

Charlie Monahan, with his knowledge of wireless and mechanics, was among four Volunteers chosen to seize the Valentia Island wireless station on Good Friday 1916.

Their responsibility was to signal ashore the German ship the Aud, with Roger Casement aboard and it's cargo of 20,000 rifles, machine guns and ammunition to arm the Volunteers for the Easter Rising.

However, they never reached their destination. The car in which Monahan, Tom McInerney, Con Keating and Donal Sheehan were travelling overturned, killing Keating and Sheehan outright. While Monahan escaped the car, he later drowned in the River Laune. His body was recovered six months later. McInerney was the only survivor of the crash.

As republicans from all over Belfast gathered in the glorious Spring sunshine for Sunday's parade hundreds more Short Strand residents watched from their doorways as the biggest parade seen in the district in years passed by.

Among the crowd were many life long republicans from the area such as Dickie Glenholmes who walked alongside Laura McAree a great grand niece of Charlie Monahan.

Lead by Piobairí na Meirleach and a Republican Colour Party, the parade made it's way through the narrow streets of a district that has produced many republican heroes who have followed in the footsteps of Charlie Monahan.

The parade drew to a close at Mountpottinger Road, where in the shadow of a newly painted mural dedicated to Monahan, Mayor of Kerry Toireasa Ní Fhearaoisa, gave the main oration.

She spoke of her pride in being asked to deliver the main address and praised the people of the area for their commitment to the republican cause over the decades.

"It is a huge honour for me to be here today amongst the residents of the Short Strand. This is a community that has provided so much inspiration and determination to the struggle and the people's unbroken spirit is renowned".

Ní Fhearaoisa also spoke of her meeting with some of the women from the district and said that, "everyone on this island should be proud to be associated with them. So much has been lost by the people of this area yet you remain unbroken and unbowed".