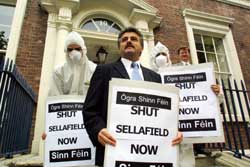 The British Government is to press ahead with plans to privatise the Sellafield reprocessing plant in Cumbria. Earlier plans for privatisation were put on hold following a series of damning reports into the plant by the Nuclear Installations Inspectorate (NII).

The reports in 2000 followed the disclosure that records had been falsified in relation to reprocessed fuel being sent to Japan. The policy of false safety information dated back to 1997 the reports found. The three reports covered site safety, storage safety and the falsification of safety records.

On site safety the report was devastating, highlighting poor management and a lack of inspection and auditing procedures. Management's pursuit of a privatisation agenda was said to have distracted them from the day to day running of the plant. The 29 March announcement has now made that agenda a reality as well as posing a danger that Sellafield's questionable safety record will worsen as the profit motive dominates.

Dr Ann McGary of the Radiological Protection Institute of Ireland has warned that the consequences of a major incident at Sellafield would be devastating for Ireland, infecting the food chain with major human and economic consequences.

Arthur Morgan, Sinn Féin TD for Louth on 30 March called on the government to oppose the privatisation saying public accountability in relation to Sellafield was already bad. The plant's notorious record in terms of accidents and the failure to keep accurate records would be a hundred times worse if privatisation were permitted to go ahead, Morgan said.

Arthur Morgan's Louth constituency has had good reason to be fearful of the plant. As far back as 1957, a study following a fire at the plant, recorded a high incidence of mental handicap in a Dundalk school. The county has been linked with higher than normal incidences of cancer and mental handicap ever since. Research carried out by local GP Dr Mary Grehan in 2004 found that 10% of families had a child who was mentally handicapped, well above the national average. The research also indicated a much higher incidence of cancer than is normal. Part of her research involved canvassing the opinions of locals of whom a staggering 98% blamed Sellafield for the health problems.

Morgan has been tracking developments at Sellafield and amongst the incidences he has raised in the Dáil are the February 2006 announcement by the European Commission that Sellafield was in breach of EU safety rules.

In May 2005 he raised the matter of a serious radiation leak at the plant and the even more scandalous three-day delay in notifying the RPII. The incident which occurred the same week as Environment Minister Dick Roche had praised what he called an efficient early warning system and exposed, yet again, the inadequacy of the Government's approach to this scandal. The incident occurred some five years after the plant had been criticised for falsifying safety information and revealed an unchanged attitude of secrecy and cover up by the management at the plant. This is the same management that are pushing the privatisation agenda and who will presumably occupy senior positions in the company after it is privatised in 2007.

In February 2004 Morgan raised the fining of British Nuclear Fuel Limited, by Carlisle Crown Court, for serious breaches of health and safety regulations. Amazingly at the same hearing BNFL, who run the Sellafield plant, went on to plead guilty to endangering the life of one of their employees in a related incident. As the Louth TD pointed out at the time, if the management don't care about the safety and well being of their employees there was little chance they would care for the health and wellbeing of Irish citizens.

At a recent EU council meeting the Irish Government reversed previous policy to back a motion calling for a new generation of nuclear plants. It is ironic that this very same motion has facilitated the privatisation agenda of the British Government and Sellafield management that has put Ireland in even greater danger from this plant which has had an extremely negative safety record. Previously Ireland along with Germany and Austria had consistently opposed nuclear power.

The change in attitude at this time is all the more perplexing considering revelations that the toxicity and mass of the waste present on the site is much bigger than previously thought. This substantially increases the actual threat posed.