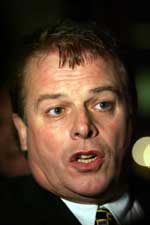 The Independent Commission of Inquiry into the death of Séamus Ludlow, who was murdered by a unionist paramilitaries in May 1976, has recommended an internal Garda inquiry be held into the case. The family has criticised the recommendations and continues to campaign for a full public inquiry into the murder.

There have already been two internal Gardaí investigations, two inquests and a report by Judge Henry Barron into the case.

New information emerged however, in the commissions report, which appears to undermine Justice Barron's November 2005 report into the case. Barron speculated that suspects had not been followed up because they were in another jurisdiction. However several instances of Garda/RUC collaboration have been cited which involve both Gardaí travelling North and RUC personnel travelling South to interview suspects and date back three years prior to the murder.

The family believe the 26-County Government had a policy of not pursuing loyalist and British murder Gangs that operated in the South and who killed at least 50 people. A nephew of Séamus Ludlow, Jimmy Sharkey, speaking after the commission issued its findings, slated the Government. "I firmly believe the Irish Government had a policy in place at the time not to pursue loyalists or members of the British army involved in the murders and attempted murders of southerners. The Irish Government didn't want to upset the British so they didn't go after the men who murdered Séamus"

Meanwhile Sinn Féin TD for Louth, Arthur Morgan has urged the Taoiseach to meet the Ludlow family and to instigate an independent inquiry immediately.