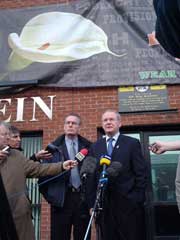 Asked about the possible affects of the murder of Denis Donaldson on the backdrop to current moves to resurrect the political process in the North Martin McGuinness believes it adds an imperative to the situation. What the process requires now, he believes is decisive political leadership. Sinn Féin has been calling for the suspension of the Asssembly to be lifted and for the institutions to be restored. "We have made the point to both the British Prime Minister and the Taoiseach at recent meetings that the sole purpose of calling any assembly together is to form a Government. That's Sinn Féin's only interest in recalling the Assembly. What is the point of producing a talking shop particularly if you have one party who refuses to speak to another party?

"I think everyone is wondering, and rightly so, who was behind the murder. The question that most people are asking is who had the most to gain? There is nothing about the murder that would make any case that republicans stood to gain from it and naturally I unreservedly condemn it. In fact I see his murder not just as an attack on him and his family but as an attack on the entire peace process.

"I want to extend my sympathy to the Donaldson family, to his children, his wife and his brothers. All these people are completely innocent in all of this. I think that in the midst of all the media reportage you need to take into account the fact that Denis's family are good, decent republicans who have been dragged into something not of their making."

McGuinness said that many theories had been offered up as to who was behind the killing. Ian Paisley had said he didn't know who killed Donaldson and then went on to point the finger.

"I think that the statement from the British Prime Minister and the Taoiseach clearly indicates that there can be no going back on the need to have the suspension of the assembly lifted. There needs to be a huge effort to restore the political institutions and if it becomes clear during the course of all of this that Ian Paisley is not prepared to do the business, then the two governments need to move on with all the other aspects of the Agreement, building on the all-Ireland dimension whilst ensuring that the British respond to the human rights and demilitarisation agenda.

In relation to what the two Governments' plans might look like McGuinness said: "Their approach has been widely documented in the media. They appear to be determined to embark on a course of putting the institutions up on 15 May for a six-week period, going into some sort of a recess, and then resuming two further six-week periods in September of this year. What we have said to both governments is that there is no point in trying to elongate this process. What we have to do is take Ian Paisley at his word. He stated quite clearly on Sunday that he regarded the Governments' plan as nonsense. The only legitimate way forward is to lift suspension, restore the institutions, attempt to put a government in position and if that fails then effectively move on."

McGuinness said that after several decades of bullying that Ian paisley was not going to change his spots but that one thing was sure- he was not going to bully Sinn Féin. But it was incumbent on both governments not to pander to Paisley and he rejected the idea of scrutiny committees which would have the power to veto important legislation such as that on the 11-plus.

McGuinness said that it should not be lost on people that the DUP are now very isolated within the process. "You have everyone else saying that its now time to put these institutions back up again".

The Sinn Féin Chief Negotiator said that any failure to put up the power sharing or all-Ireland institutions means that a fundamental aspect of the Good Friday Asgreement has been destroyed by unionist opposition to change. That would impose a huge responsibility on both governments to press on with the implementation of the Agreement. Sinn Féin would not accept the continuation of British Direct Rule in the North. He said there would then be a very powerful argument for new implementation bodies and that the argument in terms of an all-Ireland approach has been largely won. In any so-called Plan B Sinn Féin would argue for a much more powerful all-Ireland dimension.

In terms of the Sinn Féin membership across the country and their response to a failuire of political progress McGuinness said that Sinn Féin would listen to what was said by the Taoiseach and Prime Minister, and in the days that followed the party would seek more information. "What we will then do is sit down and discuss all of these matters with our Assembly team, with the Ard Chonhairle before we take any big decisions. But what is clear is that we will not tolerate a situation where we are expected to give our consent to scrutiny committees." He said recent SDLP proposals for British appointed commissioners was "ludicrous beyond belief" and was a very decisive move away from the Good Friday Agreement.

He said republicans were coming at the current situation from a number of different directions. "Understandably there will always be republicans who are very anxious and angry and frustrated that things are taking so long. Other republicans will be philosophical because they know the game is up for unionism, that there is an inexorable move towards all-Irelandism which will lead eventually to a united Ireland. Even unionists, including Ian Paisley know that. One of the principle reasons Ian Paisley will not support the establishment of a power sharing government is that he knows that he is then duty bound to have his Ministers sit on the all-Ireland Ministerial Council."

What republicans needed to reflect on was that the efforts to implement the Agreement often represented crises, they represented even greater crises for the DUP. Republicans needed to work out how any sucessful implemntation of the Agreement or any successful implementation, minus the power sharing aspects, fits into republican strategy for bringing an end to British rule in Ireland and the establishment of a 32-County Republic.

Sinn Féin's Martin McGuinness, Gerry Adams and Caitríona Ruane in the Long Gallery, Stormont last Tuesday at the launch of a campaign to promote the wearing of the Easter Lily this year, the 90th anniversary of the 1916 Rising.