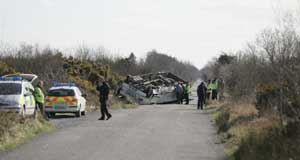 The school bus crash on the Bog Road outside Clara, County Offaly, in which one young pupil died

The tragic death of a young student in a school bus crash in Offaly on 4 April is an indictment of this Government and the Minister for Education Mary Hanafin. Following a similar bus crash in Meath last year the Government was forced into introducing seat belts amongst other safety measures. This would not happen immediately however because the Government were unwilling to spend the money. For purely financial reasons our young people would continue to travel without adequate safety measures. On Tuesday last this policy resulted in yet another death. A teenager died having been flung out the window of the overturning bus. The bus was not fitted with seat belts, if it had been the student would be alive today.

This is, quite simply, appalling. There has been a deafening silence from the media on this issue. Jeopardising children's safety to save money used to be considered a scandal. It seems that in these days of market forces children's lives can be legitimately weighed against cash without any sense of outrage. Magill magazine are considering nominating Mary Hanafin politician of the year. I think that says it all. The elite in this society have long since abandoned any semblance of morality. Their immoral credo of market forces will continue to kill until they are stopped.

Ill considered support for US legislation

In last week's Mála Poist Jim Nolan points out what appears to be a contradiction between Richard McAuley's statement that US security measures post 9-11 are "understandable", and Sinn Féin's position on fingerprinting and other biometric tools.

He need not worry. By our ill-considered endorsement of the McCain-Kennedy legislation, Sinn Féin has now put ourselves on record in support of these intrusive measures.

We now also support provisions for the US to incarcerate "illegal" immigrants, to deport those who have been unemployed for 45 consecutive days, and for a "guest worker" system of indentured servitude which is essentially a sop to employers seeking cheap foreign labour.

The 'Secure America and Orderly Immigration Act' (to give it its proper - and revealing - title) has widespread opposition among the American left because of the regressive measures that make up the bulk of the bill. Irish America, not for the first time, has signed up to proposals which are fundamentally right wing and Sinn Féin seems to have jumped on a bandwagon without properly examining it.

A much more progressive piece of legislation is Representative Sheila Jackson-Lee's 'Comprehensive Immigration Fairness Act', which would allow for regularisation of undocumented migrants without all the punitive measures contained in the McCain/Kennedy bill.

Honouring the memory of 1916

Easter is a time of rebirth, it is also a time to remember the sacrifices that were made for us. In Easter 1916 in Ireland thousands of Irish men and boys, and hundreds of Irish women and girls made the greatest possible sacrifice for this nation. Ninety years on, what those men and women fought and died for- liberty, equality and fraternity has still not been achieved.

The Proclamation by the Provisional Government of the Irish Republic hangs on many a wall across this land. But it is not good enough to simply hang it on a wall. This truly amazing document should be read over and over again.

Those men and women deserve to be remembered and honoured. The best way for people to do that is to attend their local parades and to wear an Easter lily.

There are many ways of remembering the men and women of 1916. However, there is only one way for them truly to be honoured. It is by the creation of what they dreams of, what they fought for and what they died for - a 32 County socialist republic.

Easter is a time for rebirth. It is now time for the people of this nation to be reborn into republicanism. Then maybe for the 100th anniversary of the Rising the brave men and women who sacrificed so much can truly be honored

Give ASBOs a chance

Whose fundamental rights was Seán Crowe referring to in his criticism of ASBO's? (An Phoblacht 30 March) Not the law abiding pensioners living in housing estates who have become virtual prisoners in their own homes that's for sure. His opposition smacks of this dogooder mindset who are quick to condemn Government measures to deal with violent crime and anti social behaviour but offer no solutions themselves except the same old soft soap.

ASBO's were introduced by the British Government in response to demands from an exasperated public sick and tired of watching gangs of yobs running riot, damaging property and threatening their personal safety. They are no panacea, but are having some effect on loutish behaviour and should be given a chance in Ireland.

ASBO's are a line in the sand - if you cross it you take the consequences, and that is a message that must be sent out.