"We will prioritise healthcare" - Ó Caoláin 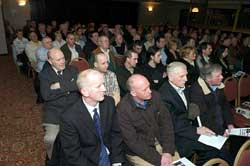 Addressing Sinn Féin's priorities in advance of the next General Election and beyond, the Sinn Féin Dáil leader said: "We will prioritise the issue of Healthcare which is a basic right for all of our people. It is a right denied to far too many today. We will be exposing the abject failure of the Fianna Fáil/PD government over the past nine years and campaigning for a truly equitable and efficient health service with universal access for all and an end to the two-tier, public-private system we now suffer."