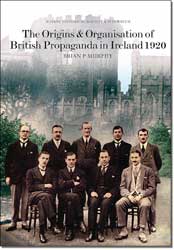 Ireland, the British empire and Iraq

The Origin and Organisation of British Propaganda in Ireland 1920.

Reading Brian Murphy's account of how the British manipulated the truth "made the hairs stand up on the back of your neck" according to Danny Morrison. The former An Phoblacht Editor and Sinn Féin Publicity Director was launching 'The Origins and organisation of British Propaganda in Ireland 1920' in Dublin last Friday. The 100-page work was launched by Morrison, Professor David Miller of Strathclyde University and the author, Brian Murphy.

The parallels between the examination of this one year of 1920 and British activities many years later are striking, with Murphy outlining how the British plotted to kill a solicitor who defended IRA prisoners, how they abolished inquests and how they utilised the "language of criminalisation" in the attempt to marginalise resistance to British rule. False accusations that prisoners' injuries were "self-inflicted" was the same as that attributed to prisoners in Castlereagh in the 1970s, said Morrison. Draconian legislation such as the Restoration of Order in Ireland Act (ROIA) would also be familiar to those who endured the recent conflict.

Morrison said that the information in the book on the manipulation of statistics with regard to IRA actions indicated the need to re-visit recent statistics on the conflict. Many killings attributed to unionist paramilitaries should rightfully be attributed directly to crown forces who set them up. Morrison mentioned the attempt on the life of Alex Maskey, coordinated by British agent Brian Nelson who telephoned British Army Headquarters in Lisburn to confirm Maskey's identity. Sir John Stevens of the British Metropolitan Police spent 15 years, a third of his professional life, investigating this British-UDA-UVF collusion. He was permitted to publish 17 pages of a 3,000 page report. "How much more is in there?" asked Morrison.

Morrison said that on one aspect alone, Murphy's book should be commended. That was the way in which he showed how the British created a false narrative about the conflict and how that has re-appeared in modern history books. Murphy mentions historians Roy Foster, Peter Hart and David Fitzpatrick in this regard.

If Danny Morrison outlined the connection between 1920 and today, Professor David Miller, who contributes an extensive foreword to Murphy's study, outlined the connections with British imperial policy in other parts of the world. Miller indicated how propaganda was an essential part of Britain's attempt to hold on to its empire. He said that lessons on media manipulation were passed on and honed from conflict to conflict. Miller, Editor of 'Tell me Lies', which deals with the conflict in Iraq, drew parallels with that conflict. In his foreword Miller wrote that: "One of Murphy's most extraordinary revelations is that the techniques, which shocked the world in Abu Graibh, have a history longer than perhaps anyone outside the military and their political masters has suspected. He quotes the records of the torture of Tom Hales and Patrick Harte who were viciously attacked, kicked, punched, hit with revolver butts and tortured with pincers. They were threatened in a mock execution. As Murphy notes 'attempts were made to humiliate them by making them hold the Union Jack and photographs were taken of Harte with the flag held loosely in his hand'. These photographs still exist, and in a telling aside Murphy simply notes that it is one of these torture photos which adorns the front cover of revisionist historian Peter Hart's book, The IRA at War 1916-1923 (2003), the main thesis of which condemns those who fought British rule.

There were also parallels with the photographs taken of torture by British troops in the 1970s. Miller referred to a recent article by Gerry Adams in The Guardian on this point.

In his own talk Murphy quoted British propagandist Major John Street as saying "the IRA rank and file" were "poor dupes of the designing criminals who pose as their officers". Street's views are positively civilised beside those of Hugh Pollard: "The Irish problem is a problem of the Irish race, and it is rooted in the racial characteristics of the people themselves," wrote Pollard in 1922. The Irish he thought were "racially disposed to crime", have "two psychical and fundamental abnormalities... moral insensibility and want of foresight" which "are the basic characteristic of criminal psychology".

Murphy outlined how propaganda and media manipulation was organised and it had a shelf life that infected modern day accounts. Kevin Myers republished one concoction of Clarke's in The Irish Times. McSwiney was accused of plotting the assassination of the Bishop of Cork.

Myers later apologized for the printing this defamatory lie. McSwiney's grandson spoke at the launch about 'assisting' his mother in personally pursuing Myers into The Irish Times building in order to get him to listen. Myers was later to admit that he had been "duped" by, "the insidious concoctions of the black propagandist," Basil Clarke. However, subsequently, the "insidious concoctions" found a willing receptacle in the fevered imagination of Kevin Myers. Murphy pointed out that Myers failed to see the same hand at work in the British account of Kilmichael. Peter Hart thanked Myers fulsomely in his 1998 revisionist account and Myers returned the compliment by hailing Hart's work as a "masterpiece". Myers, following Basil Clarke and Peter Hart, wrote in his Irishman's diary how Tom Barry and the IRA allegedly "systematically slaughtered disarmed RIC Auxiliaries after they had surrendered". This account is from the Basil Clarke school of media manipulation.

Brian Murphy outlined the significant role of Erskine Childers in developing a public critique of British terror in Ireland, observing the role of Childers and other Protestants in the national struggle.

Murphy also indicated the implications of British policy in Ireland for its wider empire and its policy of developing an Anglo-American alliance. As a result of the British-US alliance, said Murphy, "Great Britain was free to develop its empire and its quest for oil in such areas as India, Mesopotamia (modern Iraq) Afghanistan and Africa. The Irish War of Independence was fought out in the context of these and other battles by British forces to make good their claim to these new zones of imperial expansion". He said that in the context of the third anniversary of the present Iraq war it was "sobering to consider that at that time, the much vaunted Irish-American influence in America counted for nothing in comparison with the powerful Anglo-American interests that dominated the corridors of power in Washington. An interest that still exercises far more sway than the Irish over American policy today, despite the generous gift of Shamrock and Shannon Airport to President Bush".

As Childers put it in 1919, "look behind the force that holds down Ireland and you will recognize, in one of its unnumerable forms, the ugly face of capitalistic imperialism".

This short book is a must read. Soon to be available in all good bookshops and from www.spinwatch.org and www.aubane.org.