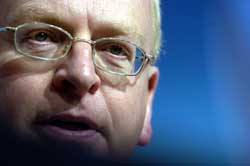 Michael McDowell's war on civil rights in the 26 Counties continues apace. In the most recent example the controversial right-wing Justice Minister performed a parliamentary sleight of hand by forcing through 200 amendments to the regressive Criminal Justice Bill dealing with such controversial issues as Anti-Social Behaviour Orders (ASBOs) and minimum sentencing. The Dáil was refused adequate time to discuss the new sections which change the Bill fundamentally.

McDowell claims the Bill aims to bring criminal law up to date to make it "relevant to the needs of modern society". However, many civil liberties and children's rights groups have expressed serious concerns about the number and intent of the measures being proposed by the Minister.

Amongst the issues causing most concern are the lowering of the age of criminal responsibility; the introduction of ASBOs; and the motives behind and potential effectiveness of new sections relating to gangland crimes, conspiracy, drugs, sentencing and electronic tagging.

Sinn Féin TD Seán Crowe called this week for the Bill to be withdrawn, saying the time allowed to comment on the new sections was "grossly inadequate". Crowe made his comments at the beginning of a two-day debate on the Bill, necessitated by opposition to McDowell's attempts to force through over 200 substantive amendments.

Crowe said that McDowell's "war on fundamental rights is at the heart of this overwhelmingly regressive Bill and the process surrounding its introduction. The Bill should be withdrawn."

"The Minister is electioneering at the expense of democracy. He is hyperactively producing legislative reforms that are in the main unnecessary. His proposals amount to little more than superficial gimmicks which he is selling to the public as quick fix solutions in order to gain cheap votes", said Ó Snodaigh. The Dublin South Central TD went on to say, "There are no quick fixes to today's complex problems of crime. What is needed is the reform, restructuring and resoucing of the Garda Síochána to ensure the enforcement of existing laws."

Dealing specifically with Parts 11 and 13 of the Bill, which cover the introduction of ASBOs Seán Crowe said: "ASBOs are flawed in that they are contrary to fundamental human rights and they don't work.

"While the definition of anti-social behaviour employed by the Minister is a marginal improvement on that used by the British, it is still too vague and the core problems still stand. In addition, the stages prior to the application for an ASBO on a child suffer from an unfettered assumption of Garda infallibility. This is neither in the interests of children nor in the interests of the Garda Síochána and public confidence in it."