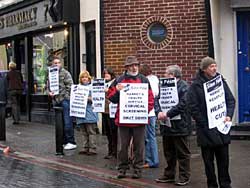 The refusal of Minister for Health Mary Harney to return free cervical cancer screening services to West Dublin has forced local Sinn Féin members to step up a protest campaign.

Party activists gathered outside Harney's office in Clondalkin last Friday, 24 March to voice their anger at the closure of the much-needed clinics in Clondalkin and Ballyfermot. The Minister's office is just around the corner from the closed Clondalkin service.

Sinn Féin representative for Dublin Mid-West Joanne Spain spoke to An Phoblacht this week about the area's protest.

"When these clinics were closed Mary Harney initially denied any knowledge of what had happened just yards from her own constituency office," Spain said. "She promised to look into it straight away. We haven't heard anything since."

"The Minister expects women to attend GPs now for smear tests at a cost of up to €70", she said. "Incidences of cervical cancer are rising in Ireland and 60 women die unnecessarily from it each year. Most of these women die because they haven't had routine smear tests."

Spain added that since free screening was introduced in Britain, 1,000 lives had been saved there each year.

"It's got to the stage now where private companies are trying to market home smear tests to women for €85 a go," she said. "We're going to continue highlighting Mary Harney's failure to look after the women in this state in her capacity as Minister for Health. Cervical cancer screening is just one area where she has let us down, there are many, many more."